Promising myself to work toward renovating the garden,  I launched pbmGarden with an initial post on January 7, 2011.

Undoubtedly, making a public commitment in an online journal helped me stick to a few of those early improvement goals.  The labyrinth and meditation circle is one achievement from that period.

In the intervening six years plants, plans and even enthusiasm for gardening have cycled through high points and low.

An unexpected benefit stemming from penning that first garden entry has been receiving the support of gardeners from many corners of the world. Entering the wonderful community of garden bloggers has been a joy. I thank you readers for your kind comments, helpful advice and generous spirit, all of which have led to genuine and cherished friendships.

Today the garden is decorated with a winter coat of white, just a couple of inches of fine powdery snow, though six to eight inches had been predicted. The smaller amount is cover for a treacherous icy layer beneath.

For those of us living in this area, temperatures are extreme, as this forecast illustrates:

The exact numbers keep changing but frigid cold promises to make traveling the little winding curving roads leading out of my neighborhood dangerous to nearly impossible for the next few days. In the fifteen years of living here, snow plows have come through only once.

Normally I would not mind waiting it out but this has proved a particularly frustrating and disruptive weather event, affecting a planned all-weekend activity and threatening an important appointment for early Monday.  Deep sigh. Deep sigh. Deep sigh.

Lessons learned from walking this meditation path are more valuable than ever today.

Breathe in.  Breathe out. 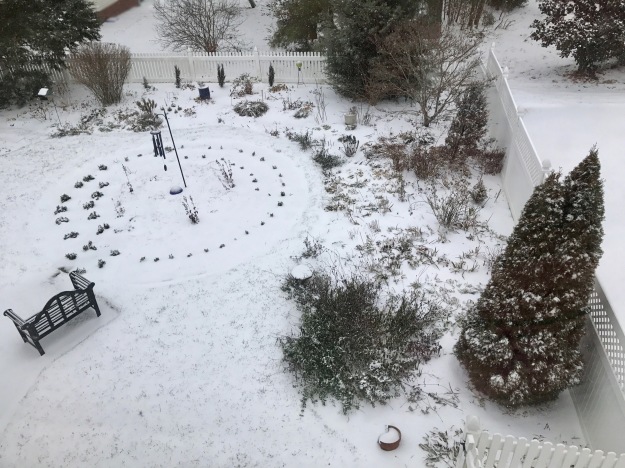 Early morning is my favorite time to enjoy the garden. The birds provide the soundtrack at this time of day with their earnest songs. Hummingbirds bounce from stem to stem around the Monarda.  American Goldfinches complement the purple Verbena bonariensis. For the first time in years early July foliage and flowers are lush.

The couple of hours I invested in cleanup  this morning worked wonders to neaten the borders before a good friend from college days came for a rare visit. Between rain showers we managed a quiet stroll in the garden and even a walking meditation in the labyrinth.  Early garden solitude followed by sharing the garden with an old friend was a restorative combination.

I had but a few minutes to enjoy the garden today and notice the many changes, but plan to spend tomorrow finishing up some weeding and planting some recent purchases. The Aquilegia canadensis (Eastern red columbine) is coming into bloom in various regions around the yard. 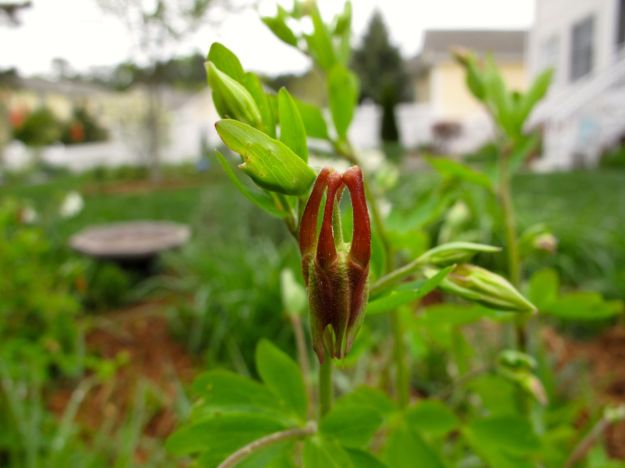 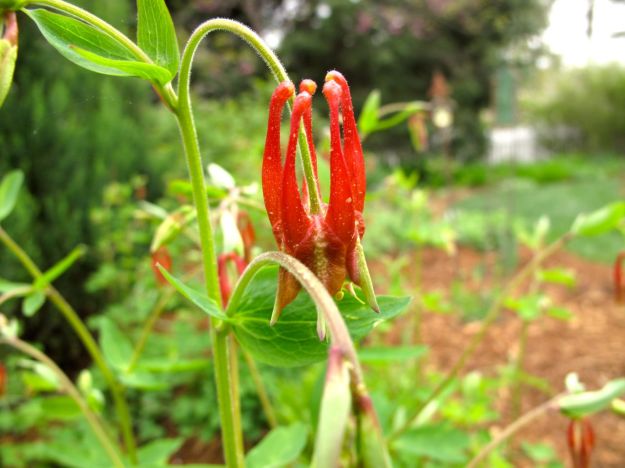 The Cornus florida (Flowering Dogwood) near the back corner is blooming unusually well this year.

Irises are beginning to fill the beds.

Birds scratch around looking for breakfast, scattering the mulch in the recently planted meditation circle. The labyrinth is calling.

Now in its second year this meditation garden is a personal space for meditative walking and serves as a focal point for the entire garden. Within a twenty foot diameter circle red paving stones form the path of the labyrinth, while various plants form the walls.

My original plan to have year-round interest, at least along some of the pathways, has been only partly successful.

I knew this year was to be an experiment to learn what plants might work best in the meditation circle. I realize now that I did lots of worrying and obsessing about the plantings, but not enough time enjoying the meditation garden. Though many plants did well, it was disappointing this summer when a large number of the perennials starting dying. Sadly once that happened I spent very little time actually walking the labyrinth.

Then last week I worked over several days to tidy up the circle, which had become a little neglected. I devoted hours to it—trimming plants and mulching, and carefully brushing off the stones—and in those hours time seemed to stand still.

Here are some views of the plants in the meditation garden after the cleanup was finished:

During the cleanup of the meditation circle last week I was reminded it is calming to be in this space, hearing the birds chatter, catching a brave one sneak a seed from the feeder. Laughter spills into the garden from children at a nearby playground. A monarch butterfly sails over, heading toward the nourishment of Zinnia nectar. Sun breaks through the clouds and warms my skin.

In those suspended moments I reconnected with whatever compelled me to build a labyrinth last year. I took time again to walk along the meditation path, stopping to notice a fallen petal, a small pile of stones, a bright tuft of moss, a leaf. These little things along the path are what seemed worthy of attention that day—the Candytuft’s browned stems barely registered when I passed. 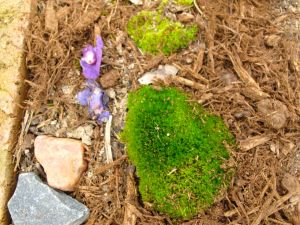 At some point, measuring my pace along the 87 steps that lead into the center of the labyrinth, I realized something I had known before. The meditation garden is a place to come to observe and enjoy and just be, and though not perfect, it is serving its purpose well when I take the time to be there.

The cleanup work I did last week was restorative for the garden, but also for me. Along with a renewed appreciation for this special place that I have created for myself, I enjoyed a peace that comes with being close to nature and a respect for simple gifts. A deep sense of balance has returned.

Today’s weather could not have been more perfect to have a group of friends visit the garden, walk the meditation circle and share a potluck lunch. Cloudless blue skies, low humidity and temperatures in the mid-seventies made for a fine day to be outside.

Inside the labyrinth Penstemon (Beardtongue) hybrids are blooming this week and buzzing with bees.

Penstemon  mexicali ‘Pike’s Peak Purple’ delineates a long stretch of path near an outer edge. Its color is deep and rich violet-purple. Its loose form means it sprawls over into the paths on either side, making it necessary to trim the overhanging flower stalks to help keep visitors safe when walking the labyrinth. 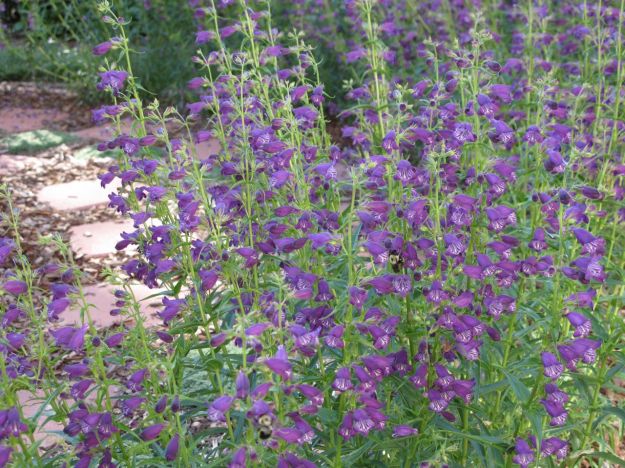 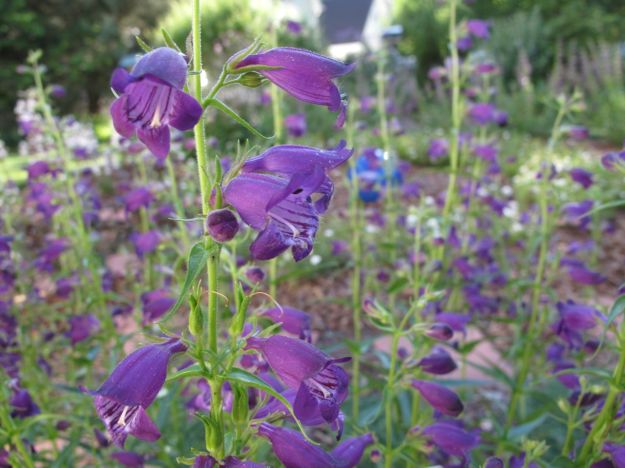 Marking several turnaround points in the labyrinth is another penstemon cultivar, Penstemon digitalis ‘Husker Red.’ This variety has a tighter and more upright form, making it more suitable and requiring less maintenance in the narrow space between the paths. Both Penstemon cultivars remained green during this past mild winter. 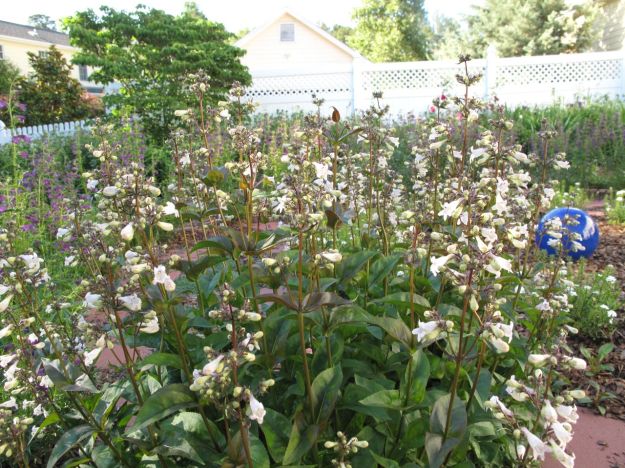 The garden has transitioned away from the focus on roses and irises, but a few Bearded Irises linger. 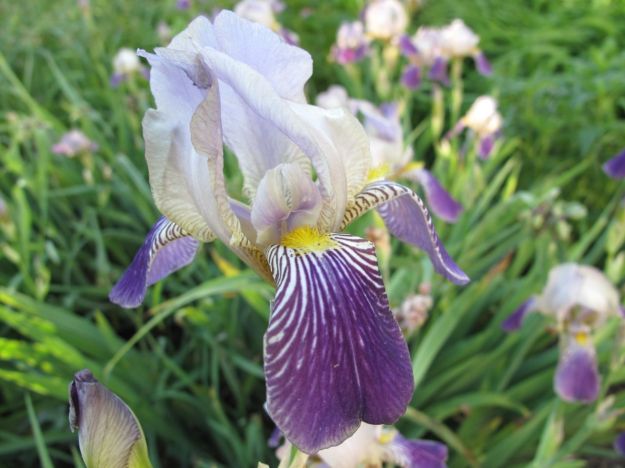 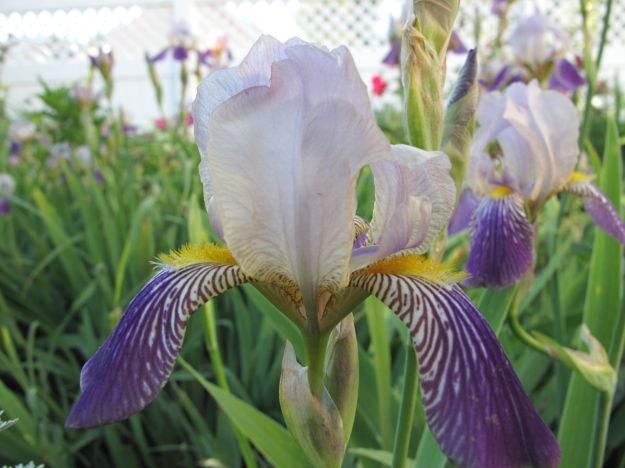 Yesterday the garden’s peony opened. This is ‘Pink Parfait.’