The temperature is 79°F (26°C) at 7:00pm but it will cool down for the weekend about ten degrees. It has been sunny and warm this week and somehow I even managed to get a few things accomplished in the garden. There are quite a lot of weeds I still need to tackle, but I can see progress in the area of maintenance. Meanwhile plants are responding to the nice weather, putting on new growth, sending up shoots and displaying glorious blossoms.

Phlox subulata (Moss Phlox) is just beginning to open. It is planted in several locations around the garden and I just made an application with our architectural review board to put some in the “hell strip” near the street where grass struggles to grow.

On the left is Phlox subulata ‘Emerald Cushion Blue’ and on the right, ‘Purple Beauty’.

This native Aquilegia canadensis (Eastern red columbine) is at about the same stage as last year and should bloom in a few days. This particular one is hovering above a thick mass of Monarda didyma (Scarlet Beebalm), also a native plant.

Despite being crowded out by evergreens in the back corner of the garden, a struggling Cercis canadensis L. (Eastern Redbud) is valiantly signaling another spring. This tree also is native to this part of North Carolina. The clusters of magenta flowers often grow out of the tree trunk itself.

I pruned the Clematis ‘Jackmanii’ back to 7-8 inches in late winter and it is leafing out and forming a lot of healthy buds.

Spiraea is in full bloom this week in the western border.

Another white flower in bloom now in my garden is Iberis sempervirens (Candytuft). This can be long-lived but I have lost many plants in the last few years due in part to voracious voles and perhaps also due to wet soil. Some have survived here at least ten years so there may be a difference in the variety also. At any rate, things are moving along. So nice to see the garden awakening. 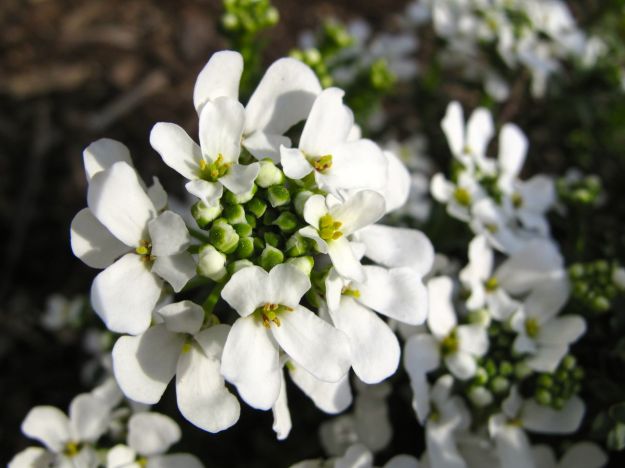 In preparation for joining Cathy’s In A Vase On Monday challenge I went out yesterday in late afternoon to see what plants I could rescue. After Sunday’s sunny 71°F. high the forecast for the upcoming week brings a blast of Arctic air with possible snow and ice, and low temperatures near 15° tonight.

It turned out there was little to rescue. The long-awaited fragrance of Daphne is beginning to be detectable near the front entrance, but the shrubs still are not in full bloom. Though there is a touch of color on several Camellia japonica buds, the daffodils continue to bide their time. Except for the hellebores the garden has surprisingly little in flower.

To hold the plant material for today’s arrangement I used 3 floral pin holders inserted into a shallow, blue and sienna glazed ceramic dish. First I added two stalks of Helleborus x hybridus (Lenten rose). Then I selected some branches of spiraea to add height and airiness in the back of the container.

Spherical brown cones and clipped sprigs of greenery from ‘Carolina Sapphire’ Arizona Cypress made a contrasting filler along the baseline of the arrangement.

[Note: I liked the way the helleborus looked in the arrangement but sadly they did not last even overnight this time.]

Thanks very much to Cathy at Rambling In The Garden for hosting. Visit her site to see her arrangement this week and see what other participants are placing In A Vase On Monday.

Blue sky and 43 degrees mark the day at mid-morning. As we head toward a warm day near sixty degrees, much of the garden is just emerging from the frosty shadows and many plants are rimmed with ice.  Today at last the Spiraea shrub is beginning to bloom, three and a half weeks later than last year’s very early flowering. 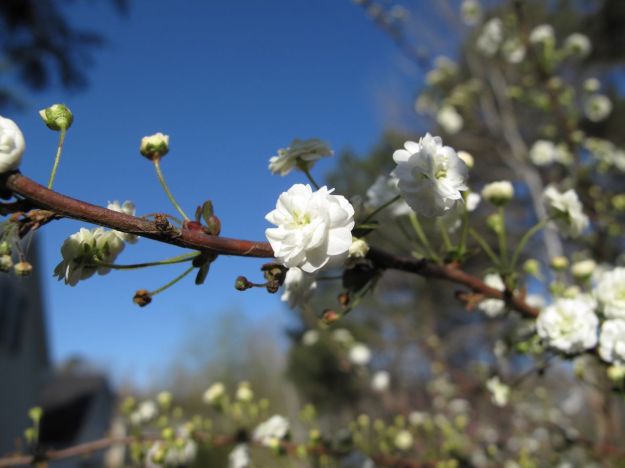 Though the sun later broke through, the early morning was cloudy and cold when I walked through the garden looking for blooms. Forecasts warn of lows near freezing tonight and temperatures will dip into the twenties later this week. But here it is, March 20, 2013, and today is the first day of spring. The vernal equinox occurred at 7:02 a.m. EDT.

The early blooms of Helleborus have been a highlight since the first week of January.

The garden is waking up but shows no sign of hurry. Among the several patches of Phlox subulata a lone flower is open.

A few little Muscari flowers began blooming this week. These were planted over a decade ago and barely bloomed at all last year, so it is nice to see them again.

Diminutive white flowers are beginning to fill the branches of a Spiraea I brought from my previous garden. 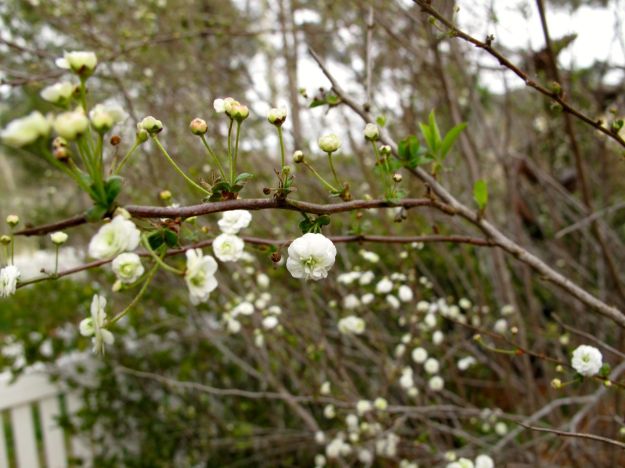 Iberis Sempervirens filled the meditation circle last year but most of what was planted there has died out. I blamed moles but also realize the site may not drain well enough for this plant. Fortunately it is tucked around the garden in other spots, a cheery little plant.

Last fall I finally remembered to add a few more daffodils to the garden. Just opened today is the first flower of the miniature Narcissus ‘Tete-a-Tete.’ The garden was so overgrown when it was time to plant these bulbs, it was hard to find a good place for them. They were relegated to an old terra cotta pot, which worked out just fine. 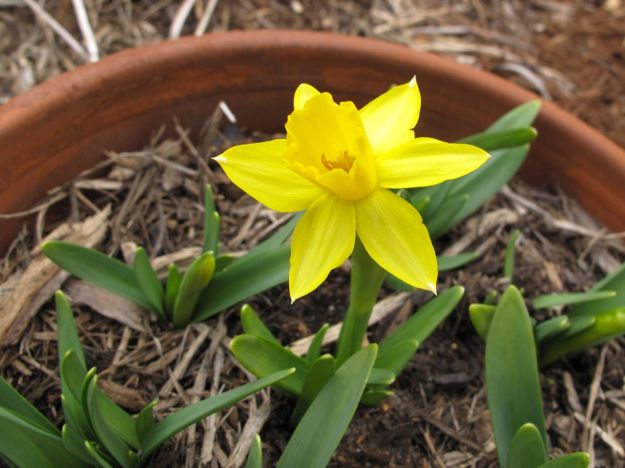 Camellia x ‘Coral Delight’ has been blooming beautifully for a few weeks. I love the milky white streak that marks these blossoms. 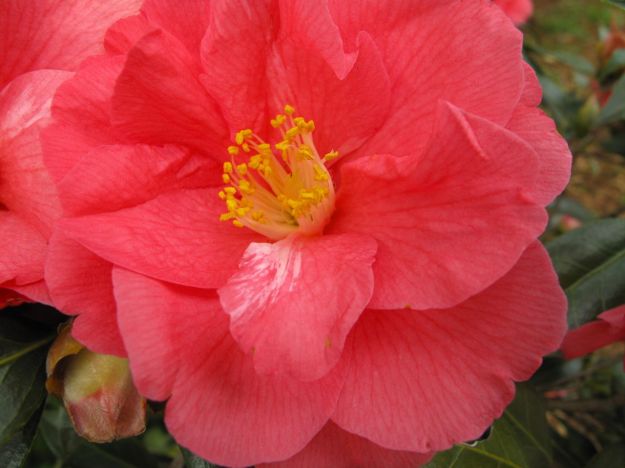 It is seventy-one this afternoon and the clouds move in and out.  Earlier, the sun was nice and warm and the several hours spent weeding this morning passed easily.

Suddenly the spiraea is covered in little white flowers, several weeks earlier than usual perhaps. This deciduous shrub is a long-time favorite. 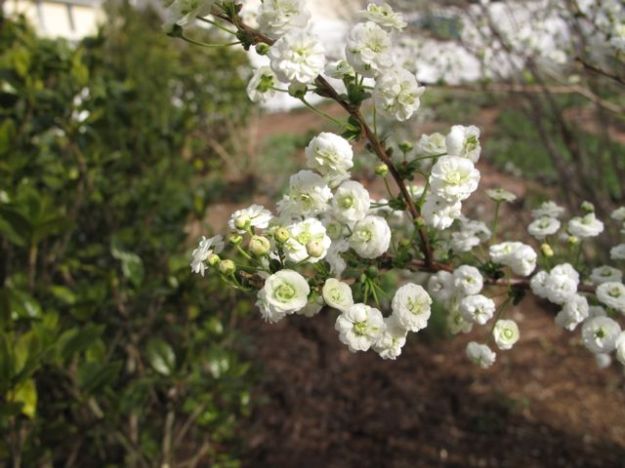 Nearby a recently transplanted plant with two mottled, red leaves is reminiscent of a trout lily, but its identification is uncertain.

Three or four Digitalis purpurea (Foxglove) were visible all winter and are starting to grow.

Leucanthemum x superbum (Shasta Daisy) never died back during the winter. The clumps could use division. Transplants from last year look healthy and strong. 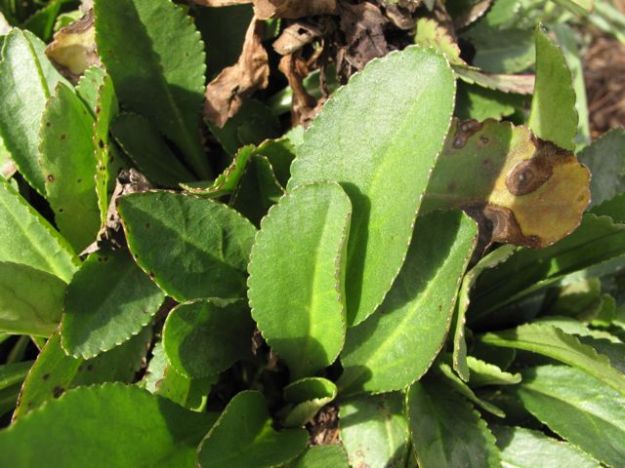 Several new Phlox subulata added to the garden a few weeks ago have acclimated well. This one is ‘Purple Beauty.’

Helleborus orientalis (Lenten rose) continue to add color around several areas of the garden. I transplanted a few small seedlings to a shady spot near the back steps.

A row of ‘Chuck Hayes’ gardenias once formed a low hedge along the back border of the garden, but a couple years of drought killed off many. The five that remain look greener and healthier than usual this Spring.

The daffodils are already finishing up their cheerful displays. This one is ‘Flower Carpet.’

In two more days it will become official, but why wait? When the spirea blossoms fill the western border Spring has made its way to the garden.

Anticipating this day back in January, I had guessed the spirea blooms would open up two weeks ago.

An impetus for renovating the garden is reinvigorating the outdoor space so there are interesting views year-round.

This morning the garden looks tidy with fresh mulch and newly mown lawn, but seeing vast expanses of bare mulch is not part of the plan. Later in the spring as the perennials begin to fill out this will be less of an issue. Ideally though the plantings and not the mulch should dominate and guide the eye, even in late winter and early spring.

A trip to my favorite garden center yesterday was fun.  Picked up a small container of  emerald blue phlox (phlox subulata). Also found a Sweet William (dianthus barbatus), a nostalgic, old-fashioned plant which I meant to plant as seeds last fall.

Today will be sunny and 80 degrees.

As January nears its end, the spiraea buds tease and promise.

Based on its blooming history, this shrub, also known as bridal wreath, may start opening in another four weeks. It has been a much colder winter though overall, so one can’t be too anxious.

An unidentified egg case, observed dangling from a spiraea branch several weeks ago, is no longer around.

This spiraea was a gift from an elderly relative many years ago for my previous garden. It was one of many transplants from that garden that has found a new home here, bringing memories of people and place.