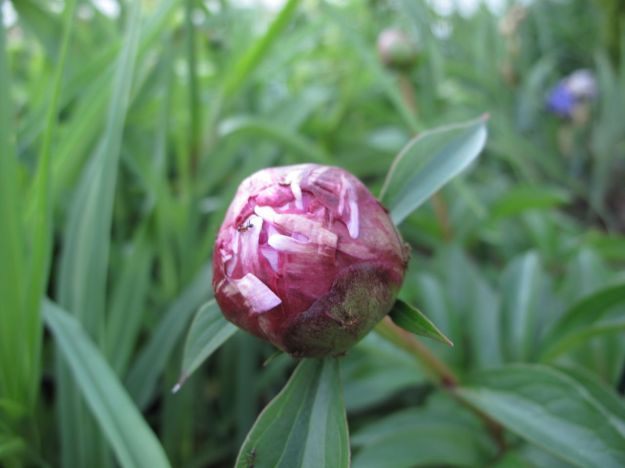 Baptisia ‘Purple Smoke’ is opening in several places around the garden, its color a rich dark indigo. 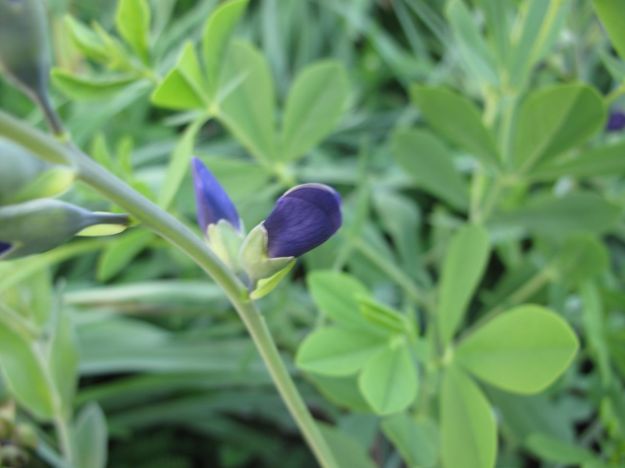 More fully open another Baptisia ‘Purple Smoke’ looks pinkish in the late day sunlight. The actual flower color is more like that of the bud in the previous image, a beautiful deep blue. 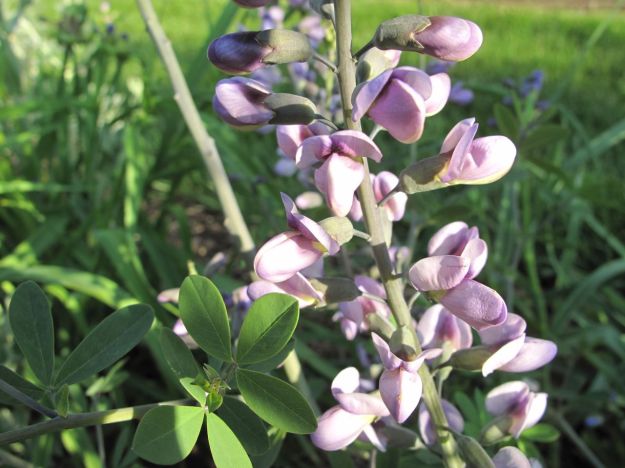 In the southern garden bed the black iris continues to stand out against silvery Stachys byzantina (Lamb’s Ear). 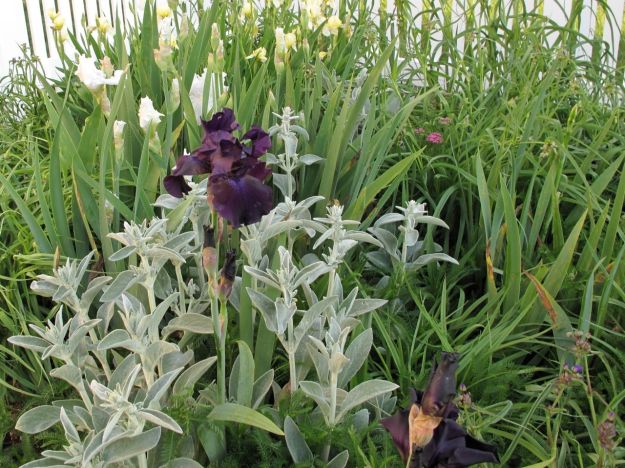 Close up the color of black iris is intense. 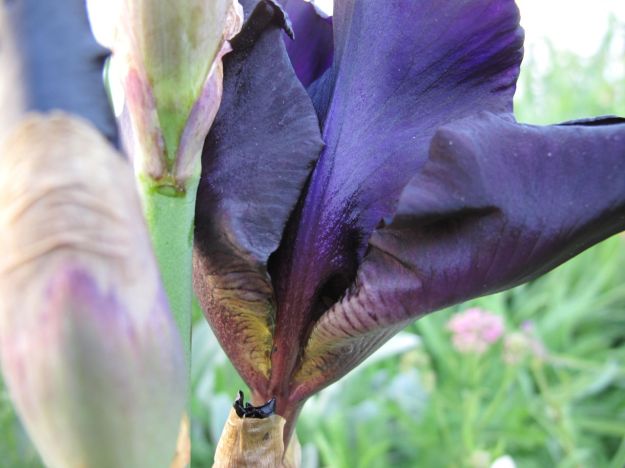 A couple of pink Achillea (yarrow) opened recently. This is a dwarf variety that stands about 10 inches high. 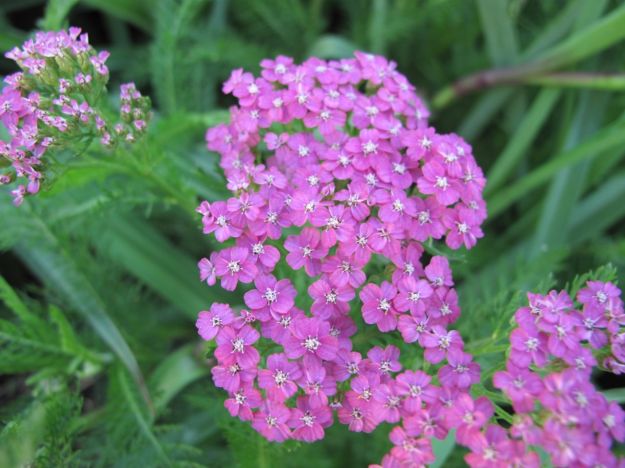 Phlox divaricata (Woodland phlox) and Catmint (Nepeta) are paired together though happenstance but appear to make nice companions. 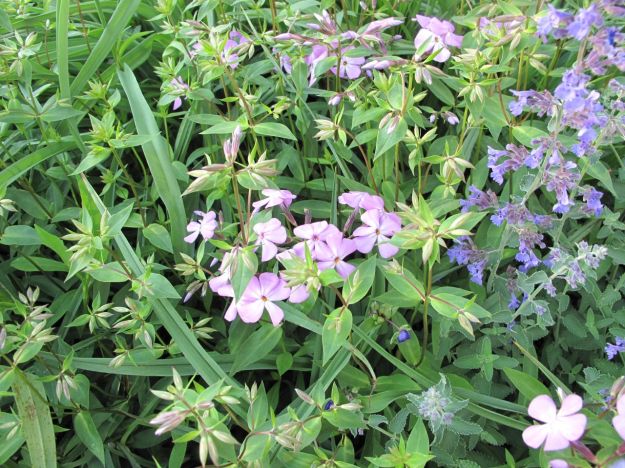 The phlox divaricata is a pass-along plant that has been in this garden and a previous garden forever. It is an old-fashioned, charming favorite. 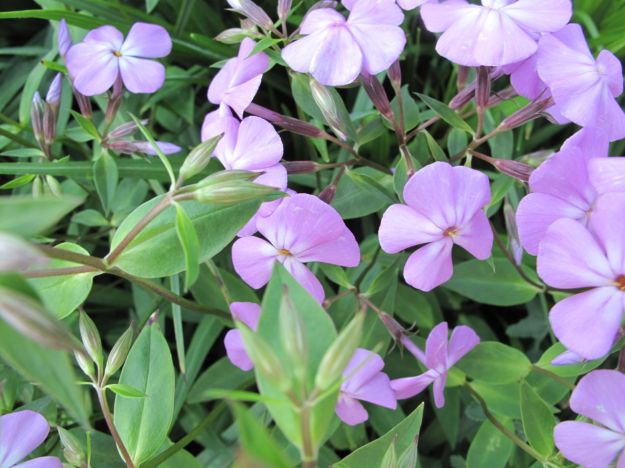 Nepeta (Catmint) makes a nice show a the front of the border. 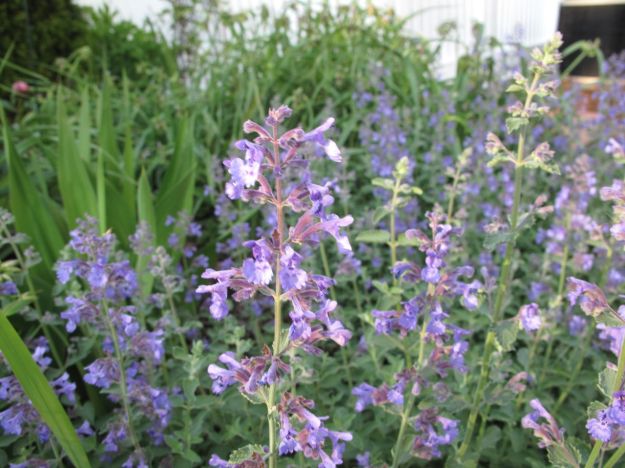 This Coreopsis was added to the garden last year and did very poorly. It is surprisingly healthy this spring with a deep rich golden yellow. 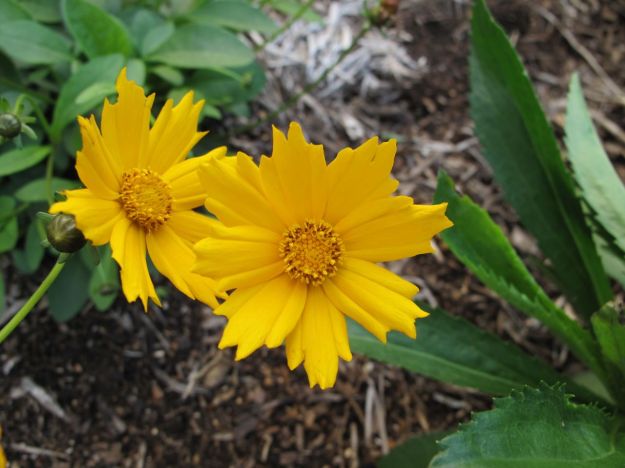 Except for one hot and dry week April has brought generous rains to the garden. Following a few threats of frost this past week, temperatures reached into the seventies today. Starting very early today, rain alternated with sun throughout the morning and then the afternoon was fair. All day the birds have sung incessantly.

The garden needs attention now, but it is going to be on its own a few more days. After this recent strong period of bloom, some things such as the roses and a few of the irises need grooming as they are beginning to look a little tired. The tradescantia is encroaching in every direction and the eastern red columbine should be cut back soon before it spreads seeds. In the meditation circle Iberis Sempervirens (Candytuft) is overdue to be pruned back, but the recent cooler weather and rains encouraged it to produce fresh blooms, earning it a few more days. 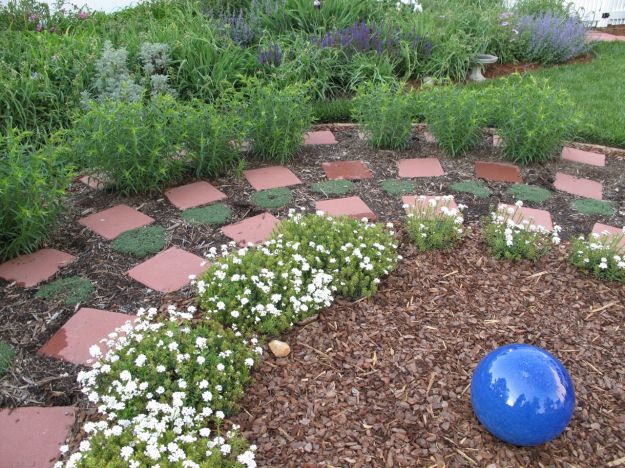 In early spring first the lenten roses, then the daffodils and spirea dominated the garden. By mid-April the first bearded iris had opened. Now, three and a half weeks later, a few irises, along with the old-fashioned rose and the clematises, remain in bloom.  Take a quiet stroll around the perennial beds and it is easy to notice the garden again is in transition. 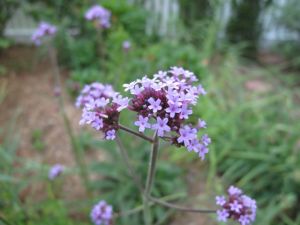 A verbena bonariensis is blooming and echinacea (purple coneflower) are beginning to open.

Several foxgloves are forming their complex flowers. Nearby an ‘Irish eyes’ rudbeckia already has reached two of its expected five feet.

The monarda (bee balm) also is tall and seems primed for a big display of red and fragrance.

A soft gray mound of artemisia accents the border and a perennial Dusty miller is creeping through the garden. Asclepias tuberosa (Butterfly Weed) will soon add its bright reddish-orange color to the blue palette that has predominated the garden in early spring. 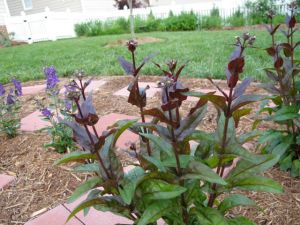 These two penstemon are planted inside the meditation path forming a wall at one of the turnaround points.

One of the small pink yarrow is just beginning to open among the lamb’s ears. Rising only 10-15 inches, it has a lacy flower and a dark green, feathery-soft foliage.

Lavender will soon be adding its beautiful color and unique fragrance to several locations. The lavenders responded positively to severe pruning in February. 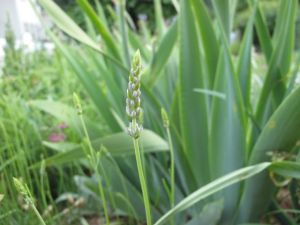 An exciting highlight is the single bloom on the peony recently added to the garden, Paeonia ‘Pink Parfait.’  Although its planting tag indicated a June bloom, it was ready yesterday without regard to the calendar, as was the gardener. 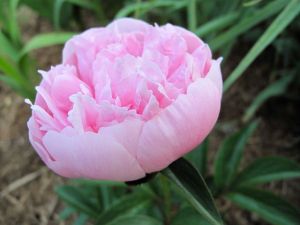 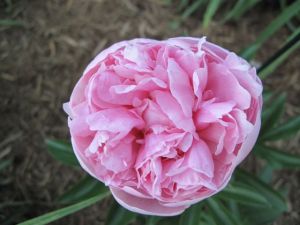 As the focus transitions away from roses and irises there are many required tasks this week that will help keep the garden looking nice. The faded iris blooms and the bloom stalks need to trimmed back to tidy up, although the leaves need to remain for several months before being trimmed back to 6 inches in a fan shape. Is this the year the irises will finally get divided?

The southern path is full of white rose campion, but none of the favored magenta-hued rose campion survived the winter.  Deadheading is a must if they are to continue to look attractive and to keep them from self-sowing so heavily.

The many Eastern Red Columbine is done for this year and needs to be cut back severely; it will maintain a nice green mound all summer.

Tradescantia is pretty now but needs to be thinned, as it has spread too widely. Many were sheared heavily ten days ago. The daylilies, the sweet peas–all overgrown.  The spirea finished its bloom weeks ago and should be pruned back hard to maintain its size. Other chores abound.  The fence installation was completed last week and paths to the gates need to be improved.

How to finish planting the meditation circle is still an interesting problem to solve, something to ponder while working on these maintenance tasks this week and contemplating transitions.