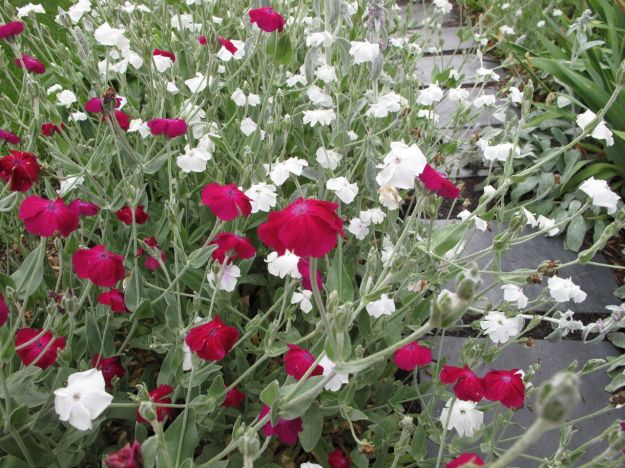 Lychnis coronaria (Rose Campion) Along The Southern Path May 21, 2013

A small blue slate path hugs the left side of my house, guiding visitors as they walk toward the main garden in back. Irregularly-shaped stones are laid to create a gently curving meander. By necessity, the path slopes downward slightly before turning right and leading through a white picket gate.

I like to think the spacing, curving and sloping of the narrow pathway give reason not only to watch one’s step, but also to slow one’s pace and to look around. In this way garden guests are invited to make a calming transition from public space to private sanctuary.

Plantings Near The Southern Side

Marking the spot just before the path begins are a few shrubs (winterberry holly, juniper and sky pencil holly) that are interplanted with creeping moss phlox, daffodil bulbs and muscari, echinacea and canna.

The path exists in the narrow strip between my house and another, with the neighbors’ air conditioning units and utility boxes all plainly visible.

These unwanted borrowed views crop up frustratingly often when I photograph plants along the path, but they are less obtrusive than one might think when actually using the path. That is because one’s eyes tend to gaze downward and be held just a few steps ahead. Traveling down the path one is invited to explore and and enjoy the plants on either side.

As visitors step from the grass onto the first blue stone they may notice ginger lily on the left, lavender on the right. 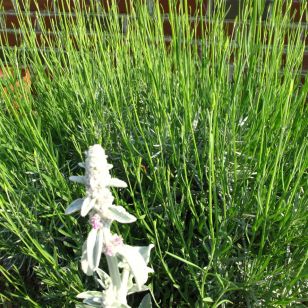 Continuing down the path they may pause briefly before stepping around the plants spilling out into the path. Some years the walkway is dominated by Lamb’s Ears. In other years cleome or zinnia are featured. Usually the plants themselves choose.

Cleome has self-seeded and is growing along the path and in-between stones. but for now this is the year of Rose Campion, both white and red.

Midway down on the right is a large clump of yellow iris that bloomed magnificently early this spring.

On the same side further down the path beebalm, Russian sage, black and blue salvia and a rather cramped pink muhly grass are all growing. On the left is artemisia, flax and baptisia. Follow the path down. 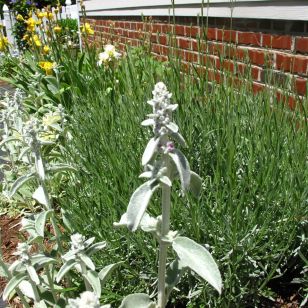 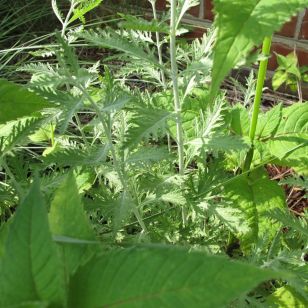 At the end on the right just before the path turns to go into the garden a Jackmanii clematis stands as sentinel. This view was taken a few weeks ago and now Rudbeckia hirta ‘Irish Eyes’ has grown to fill the corner behind the clematis. 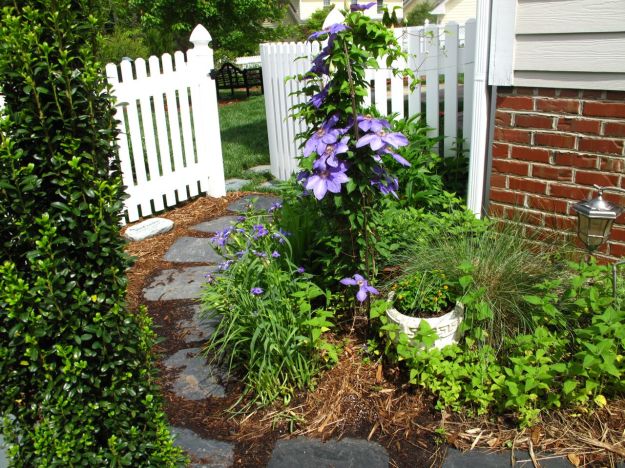 The garden is open…

It is time to join Christina‘s Garden Bloggers Foliage Day (GBFD), a monthly tribute to foliage.

Euphorbia ‘Blackbird’ has been a rewarding addition to the garden this year and GBFD would not be complete without including it. The tips have deepened to a captivating, velvety red.

The leaves of this Wintergreen boxwood have taken on a bronze hue for winter.

This bronzing effect is a normal coloration change for this shrub, but it seems more noticeable this year.

The bluish-gray leaves of Artemisia ‘Powis Castle’ (Wormwood) are unaffected so far by the cold. 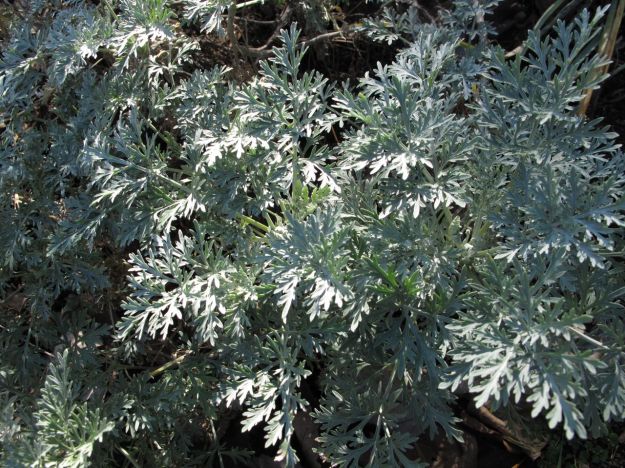 This Ilex crenatea ‘Drops of Gold’ (Japanese Holly) was planted in front of the house in October. It lost some of its gold leaves from the stem tips a few weeks ago, but the plant seems to have stabilized now. It formed attractive, black berries, but only a few. 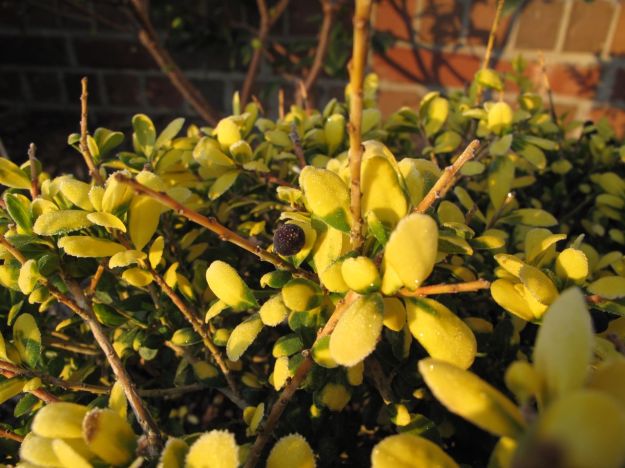 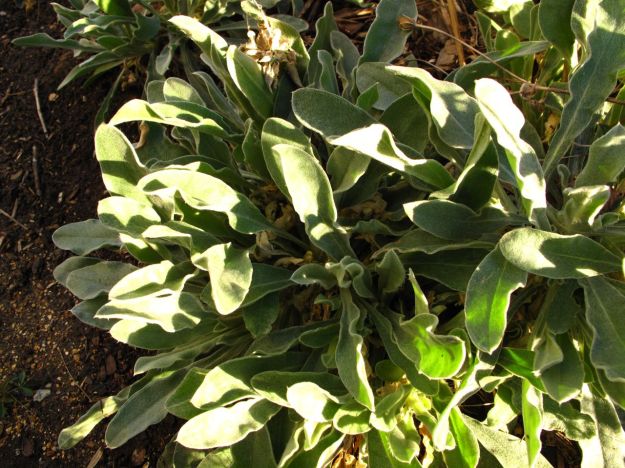 A pot of mixed sedum adds texture and interest to a corner just inside the garden gate. 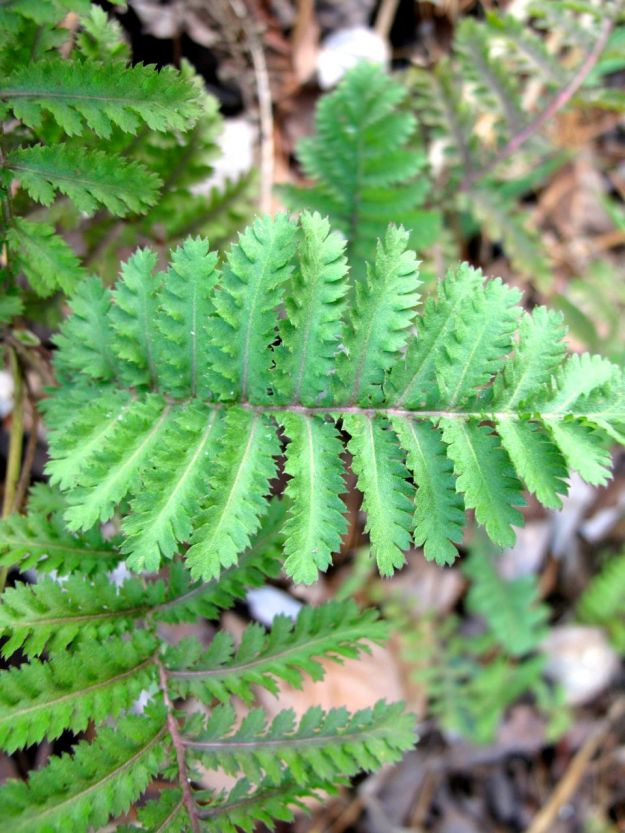 Daffodils already are sending up leaves beneath the brittle canes of Lantana camara (Common lantana). The lantana will be pruned back hard in early spring.

This cheerful little mound of green is Iberis Sempervirens. Although Iberis died out in the meditation circle this summer, it is growing in several other spots around the garden. This one may be blooming soon. 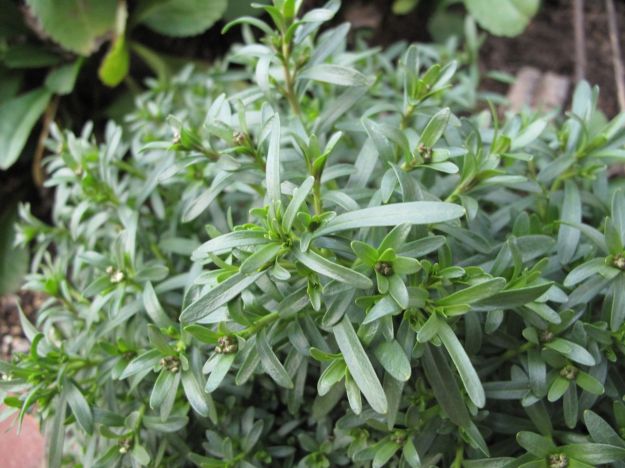 This potted geranium’s leaf is punctuated with tangerine edges and strongly outlined veins. 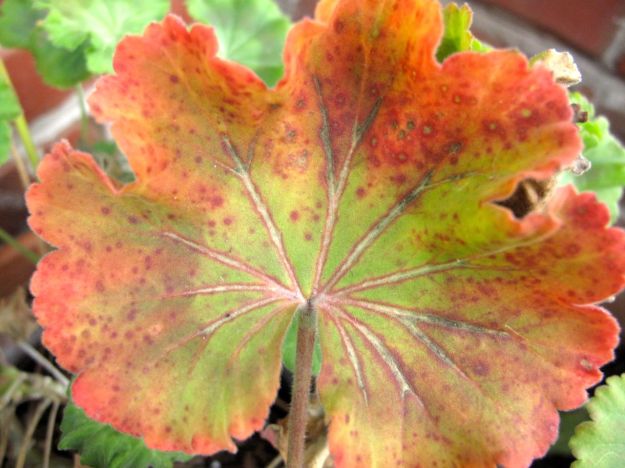 Thanks to Christina of Creating My Own Garden of the Hesperides for hosting Garden Bloggers Foliage Day (GBFD) each month. Check out her foliage observations and those of other GBFD participants.

Sporting a black stem and black calyces, a single tall flower spike of Salvia guaranitica  (Blue anise sage) appeared in the Southern side path earlier in the week. Today several of its tubular flowers are open and one can easily appreciate its cultivar name, ‘Black and Blue.’  If the pattern of frequent rains continues, there should be plenty more of this herbaceous perennial coming along for hummingbirds and butterflies to enjoy all summer. 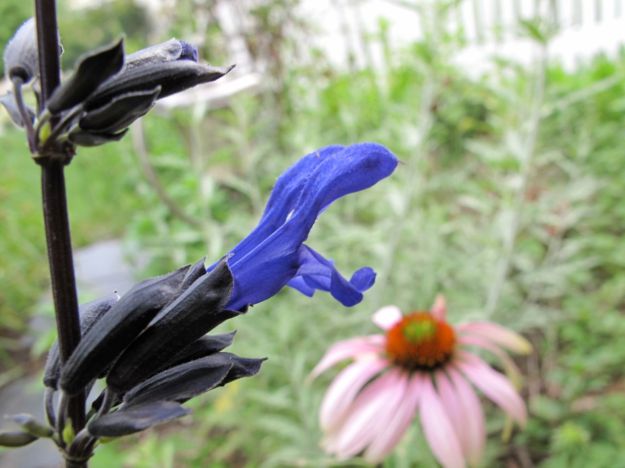 And here is a look at it from the other direction facing a sea of white rose campion along the slate path.