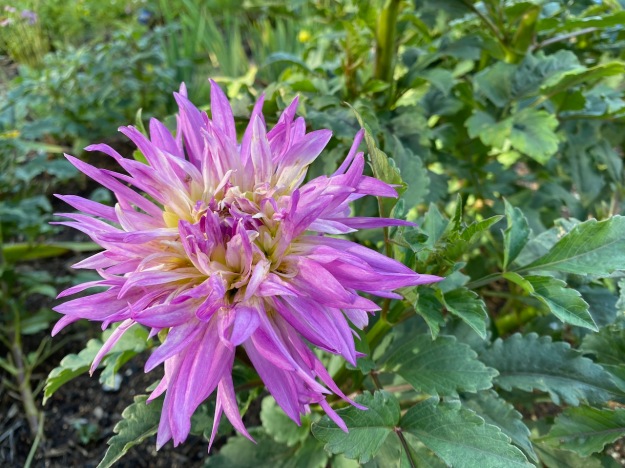 Brief though it was I just experienced my first earthquake.   I noticed, wondered, then forgot all about it until I saw some news reports that confirmed a magnitude 5.1 earthquake was reported in Sparta, North Carolina, and felt across the Triangle at around 8 a.m. According to the U. S. Geological Survey database the this is the second strongest earthquake to occur in NC since 1900. The strongest was a 5.2 magnitude earthquake near Skyland, NC in February 1916.

The earthquake bookends a week that began with approaching Hurricane Isaias.  Here in central North Carolina we were spared any problems. We had some rain, mostly on Monday, the day before the hurricane made landfall on the coast. By Tuesday afternoon with the weather cleared, the only affected area in my garden was the Rudbeckia laciniata (Green-Headed Coneflower). Its stems were bent horizontal and its yellow petals had been stripped, leaving exposed the green cone heads. 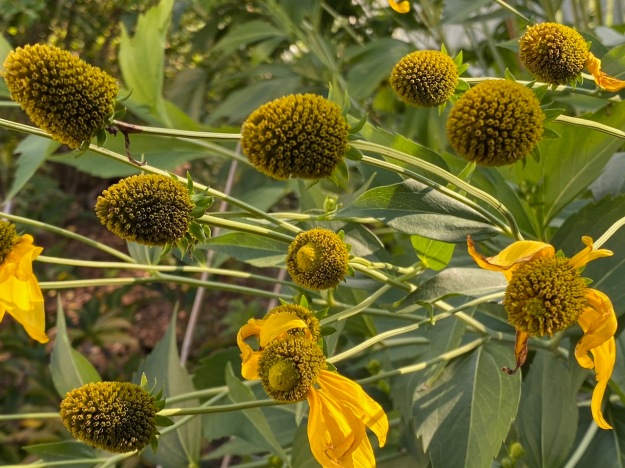 We continued to have brief thunderstorms through the week. On Wednesday morning the flowers which struggle so much during the hot days looked much refreshed. Cerinthe, for example, is much wilted by day’s end but gives no sign of the stress after nourishment from the rain overnight.

Rabbits are still driving me crazy but from a second planting of zinnias I finally had one flower open yesterday from a second sowing. 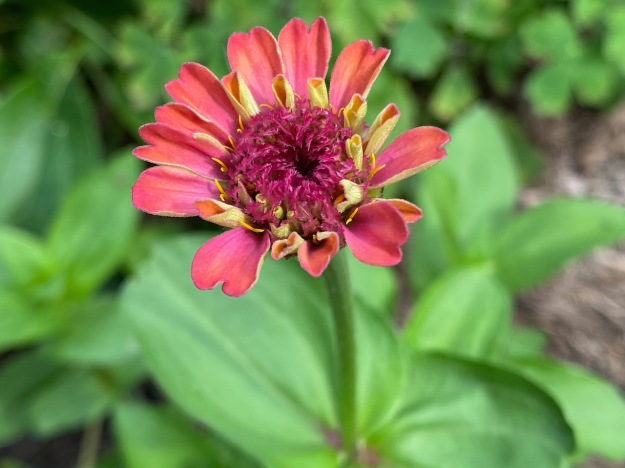 There is a 15 by 3-foot strip along the fence that was supposed to host the zinnias. Can you see the rabbit sitting in the very spot the seedlings were nibbled to oblivion? I think this is a descendent of the original culprit. I don’t know how many generations there are in one summer but I found two the day I took this picture and one was really tiny.

There is not much satisfaction in chasing the rabbit. It only goes a short distance and waits. He did at last “high tail it” to the other side of the garden!

There were a few Eastern Tiger Swallowtails in the garden, lingering longer this week than last among the butterfly bush, verbena bonariensis and lantana. This one on purple coneflower seems to illustrate “life ain’t been no bowl of cherries.” I once was given that title as a prompt for a writing assignment. The expression is stuck in my head lately after recently receiving a surprise in the mail—a packet of themes returned to me by my ninth grade English teacher. Though the “bowl of cherries” paper was not among them, still that phrase crops up every once in a while, as it did when I spotted the poor swallowtail.

Here is the dark form. They both are female.

I’ve seen a lot of Fiery and Ocola skippers this summer and finally spotted one that looks a bit different.  I think it is [ 8-9-2020 update:   Lerema accius (Clouded Skipper).]

A duskywing raced among verbena bonariensis flower heads (I couldn’t get a decent photo). Tentatively I have identified it as Wild Indigo Duskywing (Erynnis baptisiae). 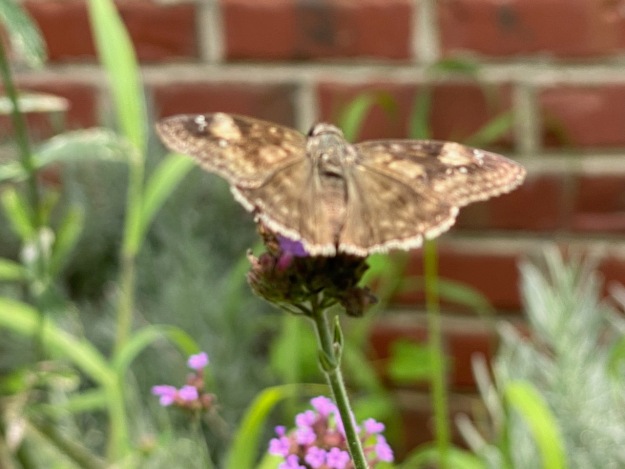 This Slaty Skimmer (Libellula incesta) perched on the favorite bamboo stake near dahlias, steering clear of me as much as it could until it finally allowed a few shots.

Nearby on the fence sat a strange insect, rather large and ominous.   iNaturalist is very helpful in identifying most of the visitors that show up in the garden. This is Red-footed Cannibal Fly (Promachus rufipes), a species of robber flies.

I saw four social media posts this week featuring a new introduction, Phlox paniculata ‘Jeana’. All reports indicate this lavender pink phlox is truly a butterfly magnet. I looked it up and found also in its favor is its excellent resistance to powdery mildew.  I would like a color other than pink but maybe I will give this one a try. I have failed multiple times to establish garden phlox in colors other than pink P. ‘Robert Poore’.  Never have white-flowered P. ‘David’ or ‘White Flame’ nor the dark magenta purple P. ‘Nicky’ made it through one season in my garden. 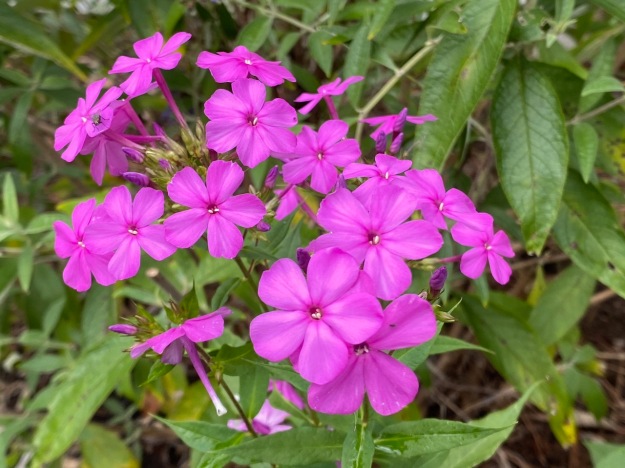 We watched an interesting movie this week called The Gardener, which is a lovely tribute to Frank Cabot’s vision and passion in creating a twenty-acre English style private garden in Canada. Cabot founded the nonprofit The Garden Conservancy.

Most of the flowerheads on Hydrangea quercifolia ‘Ruby Slippers’ (Lil’ Ruby dwarf Oakleaf Hydrangea) turned completely brown during July’s searing heat and no rain. It would be nice to see it one year covered in flowers turning red.

Hummingbirds are becoming even more plentiful lately. They used to make morning rounds to sip from salvias and now show up more frequently throughout the day. This redbud branch is a favorite perch. Sometimes when I am in the garden I forget to look up. Do you know that feeling when you finally do glance skyward? 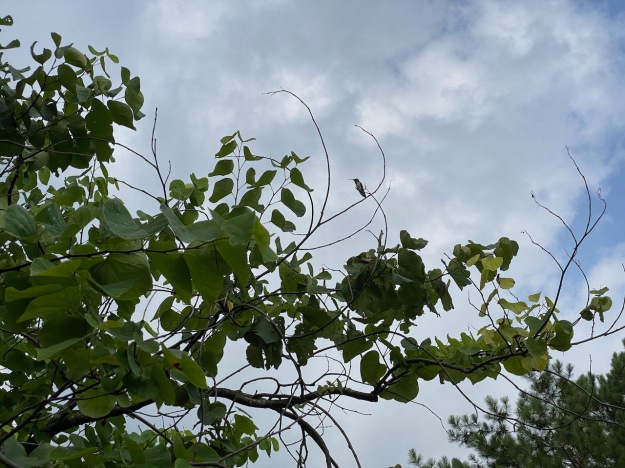