Fragrant Gardenia jasminoides ‘Chuck Hayes’ and a few other plants are newly blooming in this Chapel Hill garden today.

Long before the garden’s picket fence was installed ‘Chuck Hayes’ was planted as a low privacy hedge in the western border. Both evergreen and deer resistant this gardenia variety is very cold hardy in this area. It prefers regular watering, but seldom is anything watered in this garden beyond a week or two after planting. The hedge is benefitting from the very significant amounts of rain the garden has received all winter and spring. It also responded well to the Epsom salts I applied a month ago when some of the leaves began to yellow. Many of the original ‘Chuck Hayes’ shrubs were lost to drought and the spots left bare are gradually being replaced with taller plants that can provide more privacy.

Nearby the first clusters of flowers have opened on the Butterfly bush (possibly Buddleja davidii ‘Black Knight’).

The bees are finding plenty of food, including this Veronica spicata ‘Pink Goblin’ (Speedwell), which actually has been blooming for a few weeks now, not just starting today. It seems much revived after last night’s elaborate thunder and lightning storm that brought heavy amounts of rain.

Pale delicate flowers of Lavender are open today at last and bees are finding it irresistible.  In the background are drifts of pink Achillea and the ‘Blue Point’ Juniper hedge planted last year.

Liatris spicata ‘Alba’  is not quite open, but a little of the white flower is visible. The soft grass-like foliage provides a nice texture in the northern border.

One more newly opened flower today, a cheerful Leucanthemum x superbum (Shasta Daisy). There are many large clumps of this herbaceous perennial all around the garden, so soon this single blossom should have plenty of company. 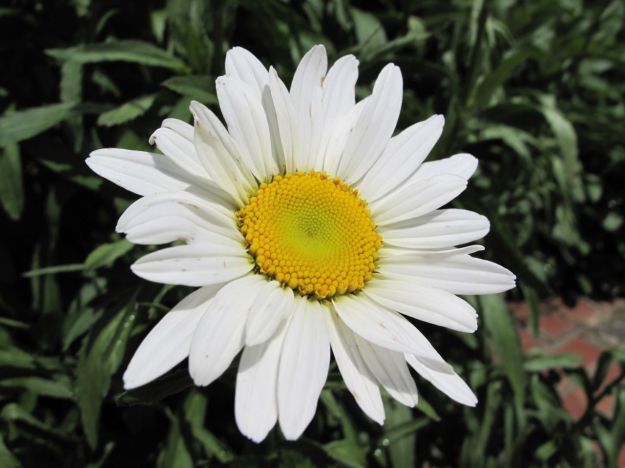 Continuing yesterday’s tour around the garden, here are some more plants that I found in bloom in mid-September.

The tiny blue flowers of ageratum, or blue mist flower, show up in the fall. This perennial is Hardy Ageratum (Eupatorium Coelestinum). This plant grows well in part shade among some irises near the Arizona cypress in the back border. Ageratum can be somewhat aggressive, though it has not been so for the last several years.  With more frequent rains this fall, it may need a watchful eye this year.

Tradescantia, or spiderwort, is in a re-blooming period now that the extreme heat has left.  It fills in many spots where other perennials have quit blooming. Colors range from deep blue such as this one, to violet, to pale lavender, to almost white.

Gaura is new to the garden this year. Perhaps it really has been in the sleep phase of the old garden adage regarding perennials: sleep, creep, leap! It has not been as showy as expected and succumbed to the periods of drought by almost dying back (Oops-the tag did say to water weekly in dry periods). Happily though the plant has improved recently. This is Gaura lindheimeri ‘Passionate Blush.’

It is a delight to have the soft pink clusters of Autumn Joy Sedum in this garden again. The rabbits damage it every spring and for the past few years it has not bloomed at all. This is actually a piece from the original that broke off during spring cleanup.  It has competition here from various other plants which are vying for this spot.

Three sprigs of catmint (also pulled up inadvertently during spring cleanup) grew into a small, colorful hedge at the front of the northern border. It has been blooming all summer.  It looks scraggly in the picture, but when standing in the garden, it really has a nice soft effect.

Perovskia atriplicifolia (Russian Sage) has been planted in the garden since its first year. This spring I moved a portion to the side garden where it has thrived.

Every garden needs a Butterfly Bush or so I used to think. At a talk at the North Carolina Botanical Garden it was suggested to eliminate them as they can become invasive. I have never cared for the fragrance and it does not perform well in this location. This one is probably Buddleja davidii ‘Black Knight’ and I do plan to take it out this fall.

A few more blooms were identified in the garden yesterday, so this post will be continued.

After a wet spring with moderate temperatures, the heat of the last few days has seemed to shock the grass, but so far the garden is holding its own. A very brief, early morning thunderstorm brought little relief, as it was more thunder than rain.

Several perennials await planting.  There are three lovely yellow-pink, peachy Yarrows for height in the back border. There are also five Verbena bonariensis, which are planned for the meditation circle. 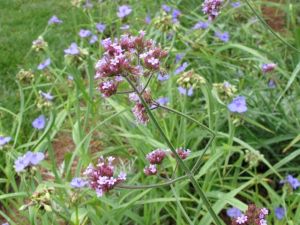 Spruced up the garden for a few hours this morning, trying to shape and edit along the way.

As always, there is more to do tomorrow.