Lately I have spent very little time in my waning summer garden, but yesterday in the peace of the early morning I enjoyed some quiet moments watering and assessing the main borders.

Much of my garden is shutting down for the season. Cleome and phlox, which managed to carry the garden through the worst of the heat and drought, now have quit producing.

After spring, my favorite time to garden, all bets are off anyway, but I did make an effort this year to plan for more interest in the summer months. I also watered frequently when rains did not come, something I rarely am willing to do. Nevertheless, it has been a tough summer for gardening.

Even some old reliables, such as Rudbeckia hirta ‘Irish Eyes’ felt the strain. Usually a star in the summer, this year ‘Irish Eyes’ struggled and gave up all too quickly. Just a few flowers remain.

Many new plants have been stressed too. Although I tried to keep them happy, three new gardenias and one of the two new camellias appear to be doomed.

For several years I have admired photos of Agastache (Mexican hyssop) from across the blogosphere. Finally this spring I brought Agastache ‘Kudos Ambrosia’ home from my local garden center, where it has languished.

Also, despite packaging promises of “flowers summer through fall,” neither a new red Clematis ‘Niobe’  nor some red and purple dahlias planted in spring have yet to make much impact. These plants at least look healthy though so I am optimistic in a few more weeks their performance will improve as the weather cools.

Even with these and other setbacks, there are a few bright spots in the garden, which were really my focus for today.

Clematis ‘Jackmanii’ has rebloomed. This vine looked lovely in spring, then turned completely brown in time for Christina’s visit. I trimmed part of it back halfway but it seems to have all recovered, so I cannot give credit to the pruning.

Zinnias continue to look colorful and healthy. These orange ones are my favorite each year. 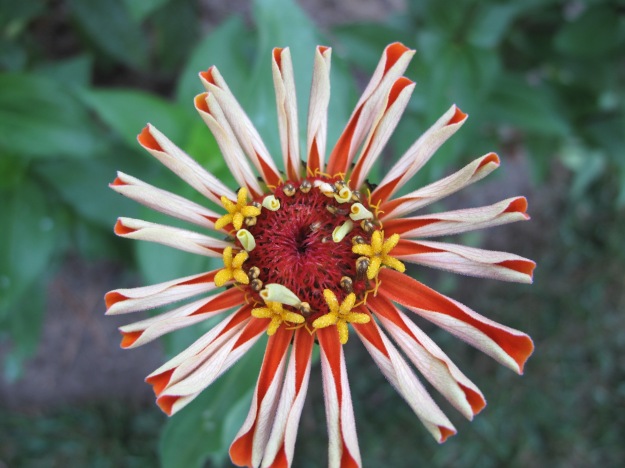 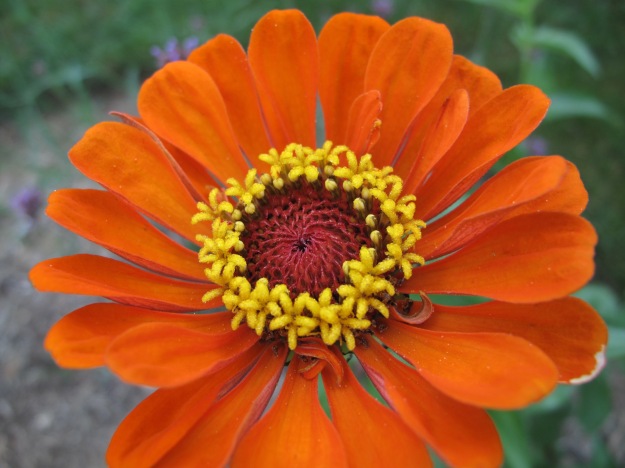 I purchased a few red-orange Zinnia ‘Profusion Fire’ as plants for some instant color in late spring. The ones planted in containers did not make it, but in the ground they coped better. This one looked nice in the dewy morning, surrounded by fresh leaves of Aquilegia canadensis (Eastern red columbine) and perennial Dusty Miller.

Zinnia ‘Profusion Fire’ Peeking Out From Under Aquilegia canadensis

Rudbeckia hirta (black-eyed-susan) is not unusual at all, but I have had trouble keeping it established in my garden and am excited it has done well this year.

Physostegia virginiana (Obedient Plant) which opened about 10 days ago continues to look fresh in the northwest border. The cuttings I brought inside for Monday’s vase also are holding up well. 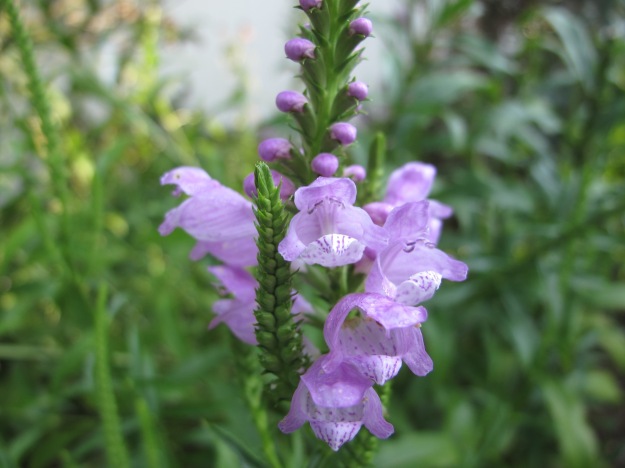 Cosmos planted from seed in early spring in the southern side border faced stiff competition from Cleome that reseeded vigorously.  Only a few cosmos plants survived the battle and none have bloomed so far even though the cleome has been removed. They look strong and healthy bathed in yesterday’s early sunlight. I expect them to rally this fall. 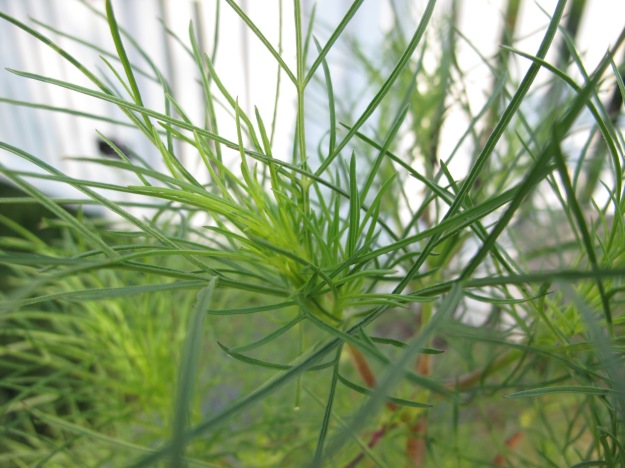 A dependable highlight for weeks and weeks each year, Autumn Joy (Stonecrop) is doing well. I really like it in this green stage. 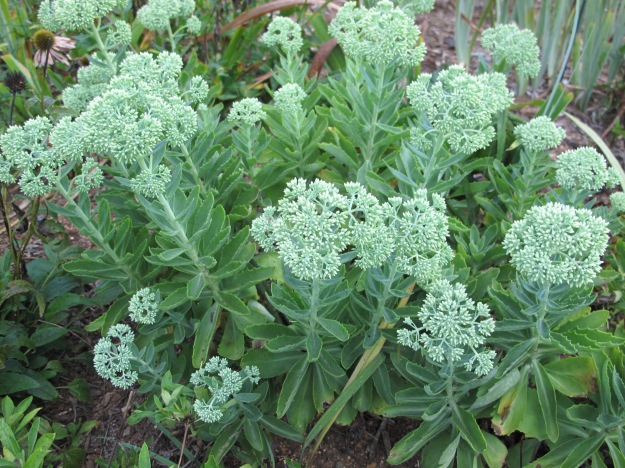 A native, Callicarpa americana (American beauty berry) started flowering a few weeks ago. Berries are forming too, suggesting just a hint of the pink that will mature to a shocking shade of magenta. 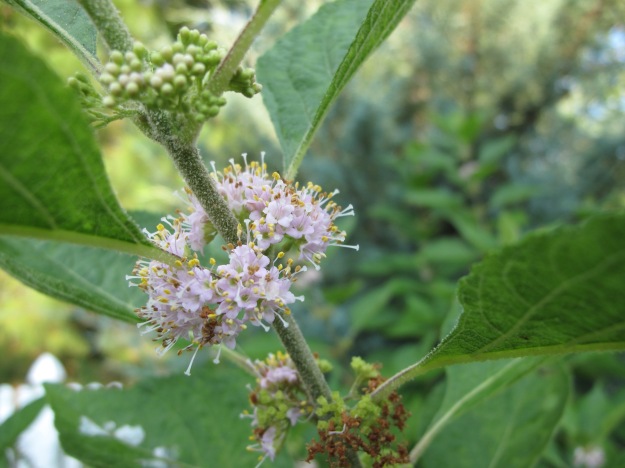 So, at mid-August the garden is not as lush as last summer when there was ample rain to sustain it, but having chosen to water this year I have found myself more connected to its changing moods. Though sadly I could not save all the plants, I have had the pleasure of time spent among the flowers and the gift of being more aware of the bees, butterflies and other insects visiting my little backyard haven.

And then there is this: my husband spontaneously said tonight, “What a luxury the garden is.” I think he is on to something.

Summer is winding down. The light in the mid-afternoon garden reveals late summer blooms and insects and portends the seasonal shift. 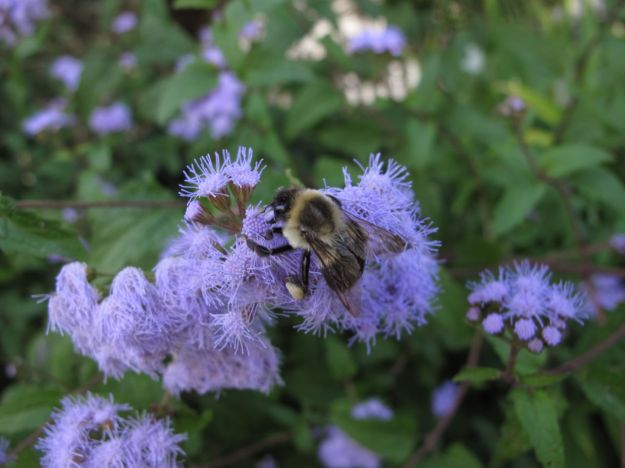 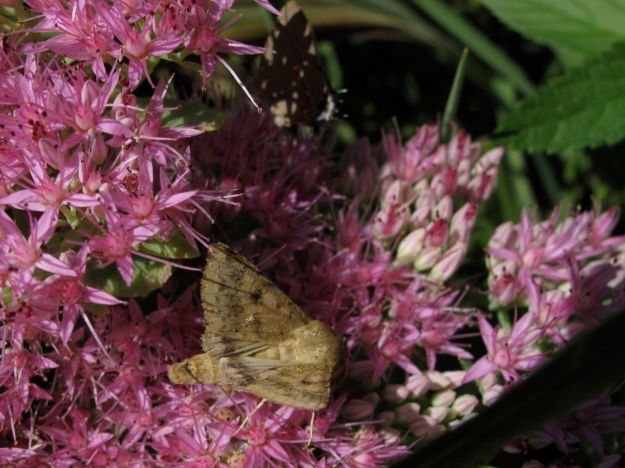