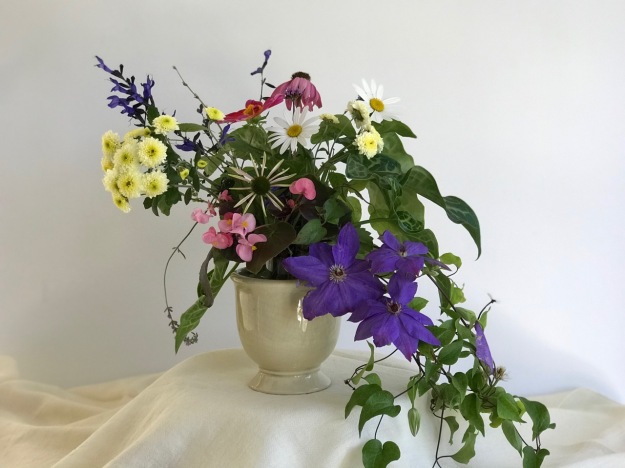 On January 14, 2014 I began creating weekly vases and participating in a popular ritual called “in A Vase On Monday.” Hosted by Cathy at Rambling In The Garden, “In A Vase On Monday” has intrigued and enticed people across the globe to share some flowers, foliage, berries and branches plucked mostly from their gardens.

But before I was in the know about it, Cathy had already been building a community of floral enthusiasts for months. This week Cathy is celebrating the Five-Year Anniversary of her first Monday vase posting. I cannot thank her enough for providing this unique coming-together of garden bloggers. Mondays are made better seen through her eyes, with Cathy-style plants, props and commentary. So thank you Cathy and Happy IAVOM Anniversary! 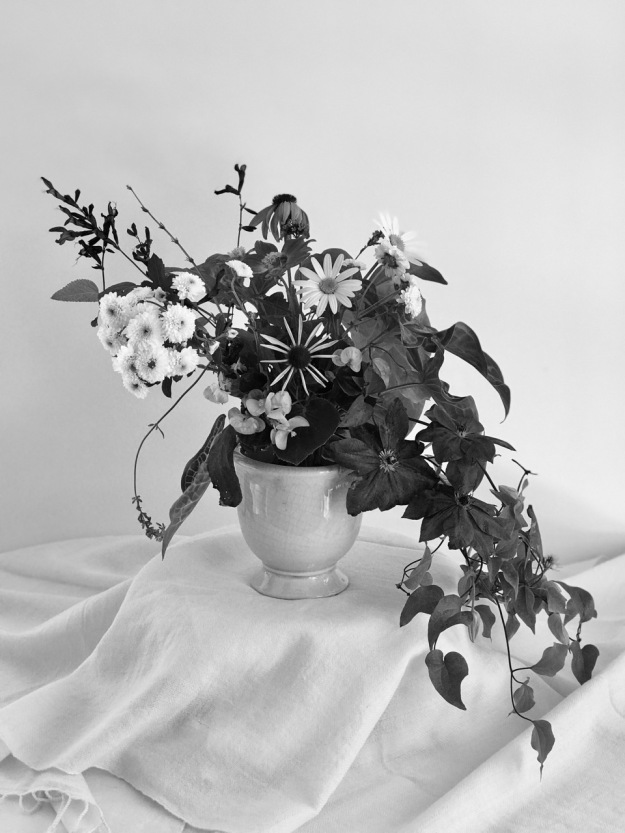 To mark her fifth anniversary Cathy challenged contributors to create a (Not) In a Vase on Monday this week. Every idea I came up with for presenting my flowers seemed to still need a container. So I am sneaking in a vase while declaring it is I who cannot be contained. I cannot contain my enthusiasm for this last collection from the garden, picked before our first dip below freezing. Though I gathered some sasanquas just in case, there were plenty of other colorful choices to use instead today.

A few pristine Shasta daisies seem to defy the season. I plucked them first. 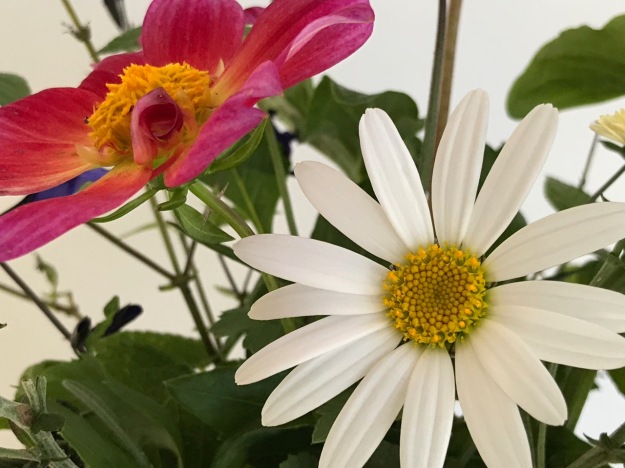 Next are pale yellow button chrysanthemums just coming into bloom, passalongs from my mother’s first cousin, Virgie. She shared many, many of her plants with me and I have had them now for a good part of my life. 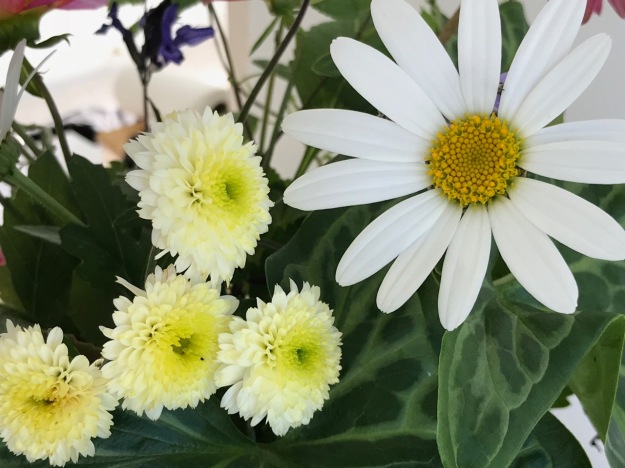 My uncontainable enthusiasm though mainly is reserved for the Jackmanii clematis, whose large purple blooms always bring a smile to my face—especially so in November. I envisioned them cascading beyond the vase and they more or less achieved my vision. Arum leaves dance in proximity on the right side of the design. 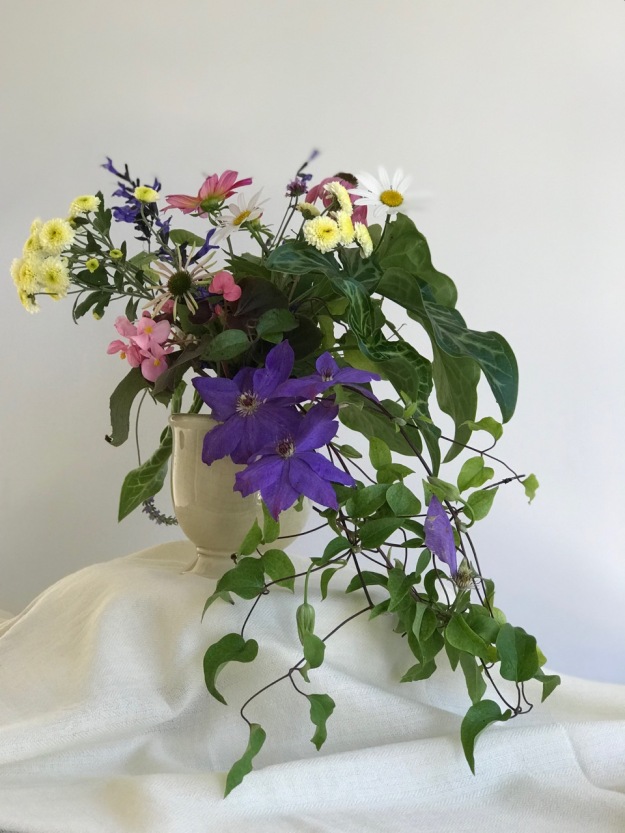 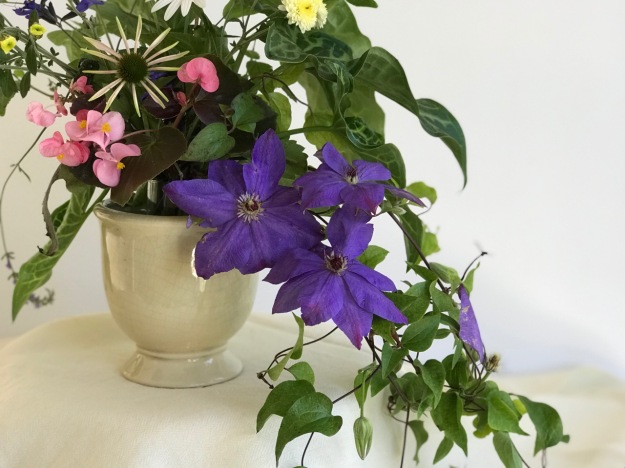 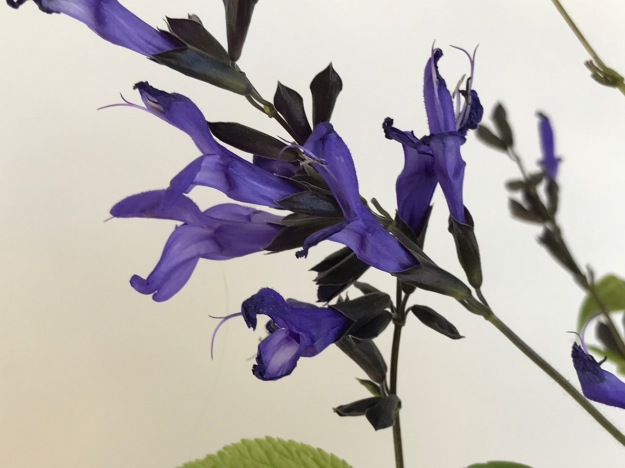 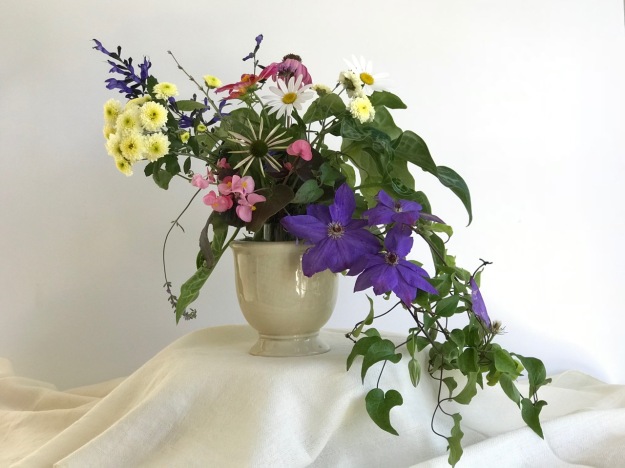 Again, happy anniversary and thanks to Cathy at Rambling In The Garden for hosting and giving us an opportunity to share flower designs across the world. Visit her to discover what she and the other wonderful contributors have found to place In A Vase On Monday.

40 thoughts on “In A Vase On Monday – Anniversary Five”