A surprise appearance in the southern border this week is Lycoris radiata (Spider Lily).

Planted in October 2014, these are from six bulbs ordered from White Flower Farms. I purchased them using a birthday gift certificate received that summer from dear friends Bill, Cecy and Susan.

I have loved spider lilies since childhood. My grandmother had a few bright red ones that erupted through a mossy patch where I often played.

In late summer to early fall, flowers of L. radiata appear first, later to be followed by the leaves. For the past 3 autumns since planting time in my garden, only foliage had emerged each October, signaling there would be no blooms that year. As consolation the foliage overwintered before disappearing in spring.

So it is a delight to welcome the flowers this year. More coral pinkish than the bright red I had expected, the blooms are quite beautiful.

Sometimes known as surprise lily I accept this apt moniker as indeed they were a surprise.

Having decided these probably were not going to ever bloom I took a chance on using their designated spot to tuck in an extra tomato plant in early summer. Recently I read one should not plant lycoris too deeply, bulbs necks should be above ground to encourage flowering. Perhaps in planting the tomato I disturbed the soil enough to expose the bulbs.  Or maybe it was just time. 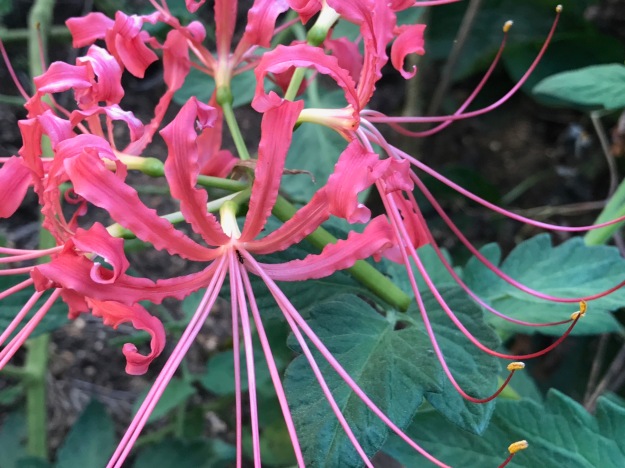