On Friday afternoon of the 2017 Garden Bloggers Fling, we descended upon the National Mall in Washington, D.C. to visit the Smithsonian Gardens. The day was hot and sticky, typical weather for this time of year.

The Washington Monument was visible on our left as the bus turned right, dropping us off in front of the Smithsonian Institution Castle.

With three hours to explore, many of us began by entering the castle and passing through to the back to view the Enid A. Haupt garden. My photos failed to capture the geometry and scale of the garden. The black iron edging seemed to grab all my attention. 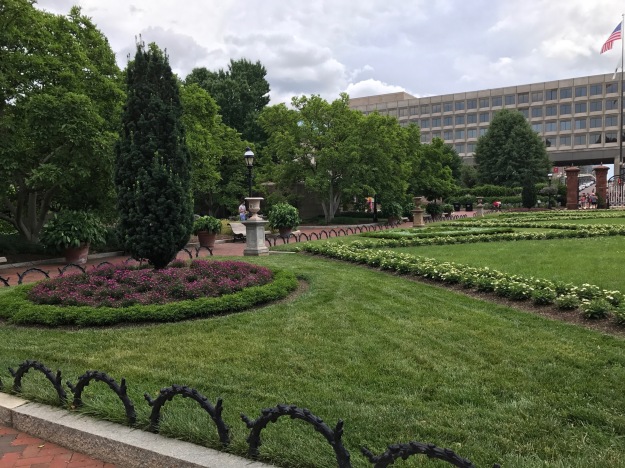 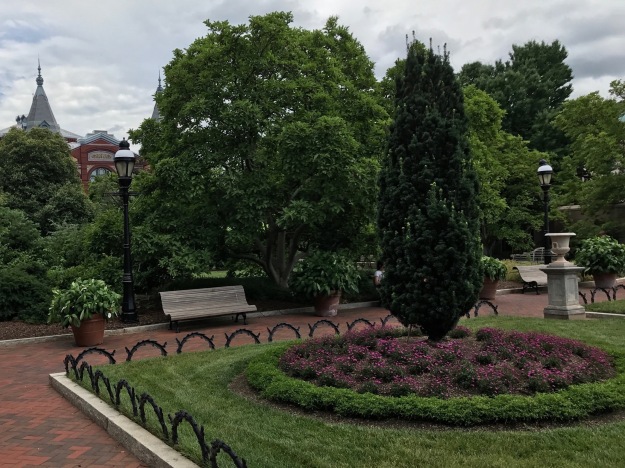 The Mary Livingston Ripley Garden was oft-mentioned as one to be sure to see. Indeed the lush plantings were a delight. 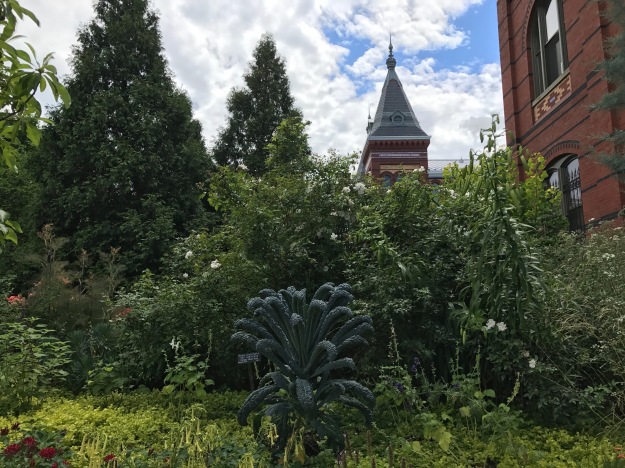 On the left below is a Franklin tree, named after Benjamin Franklin. It has not been observed in the wild since early 1800s. It exists today due to propagation of seeds collected between 1773-1776 by William Bartram from the tree’s native location, a mere couple of acres along the Altamaha River valley in Georgia (southeast United States). When in bloom it is said to have white camellia-like flowers. 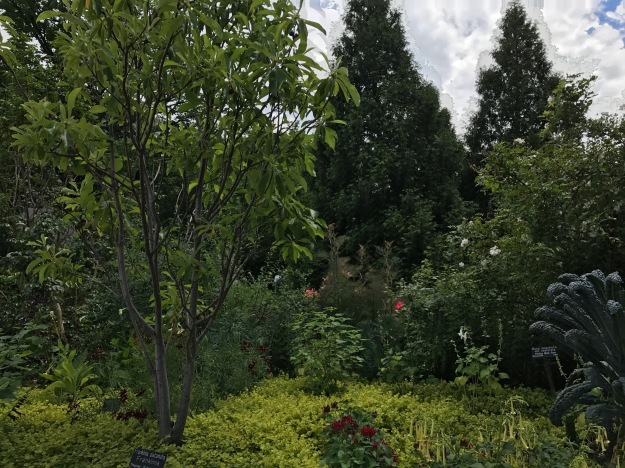 These contrasting textures were appealing.

This planter was sedately sophisticated. In the background yellow echinacea added a lively accent. 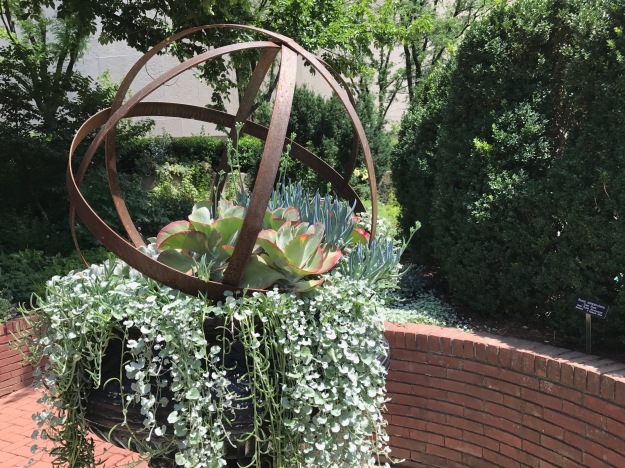 Echinacea was incorporated into many of the Fling gardens. The Ripley’s sunny Echinacea ‘Leilani’ is one I had not seen before.

The round edges of the Hirshhorn Museum are visible in the background, reminding me I would have enjoyed spending three days on the Mall revisiting museums. It had been many years since I was last in D.C. 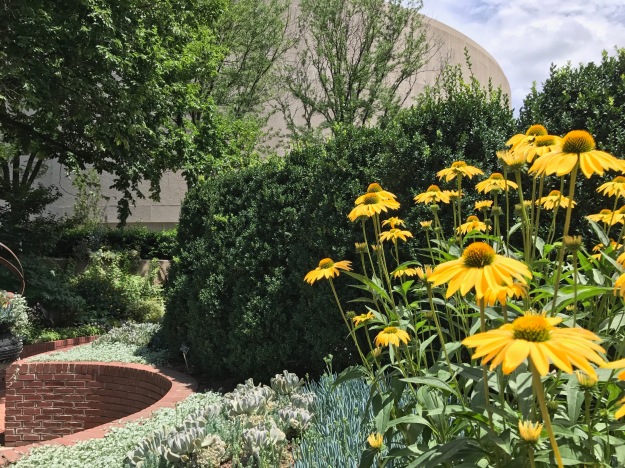 As it was I detoured from the gardens to reconnect with some old friends at the National Gallery of Art. For me this was gardening for the soul. Notice how inspired these artists were by garden themes. (Click on an image for a full-view slideshow.) 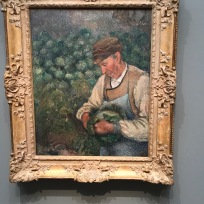 The Gardener – The Old Peasant with Cabbage by Camille Pissarro

The Garden at Petit Gennevilliers, 1893 by Gustave Caillebotte 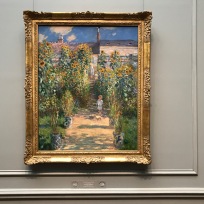 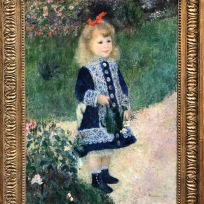 A Girl With A Watering Can, 1876, Auguste Renoir 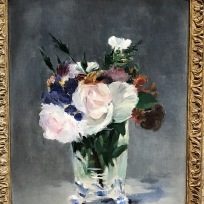 As I headed back to meet up with the Flingers I passed one of several buildings added to the mall since my previous visit, National Museum of the American Indian. The architecture was so interesting, it would have been great to see inside but time was running short.

National Museum of the American Indian

National Museum of the American Indian

The U.S. Botanic Garden was the final stop before catching the bus back to the hotel. I had time only for a quick peek into the conservatory and a dash through the outer gardens. 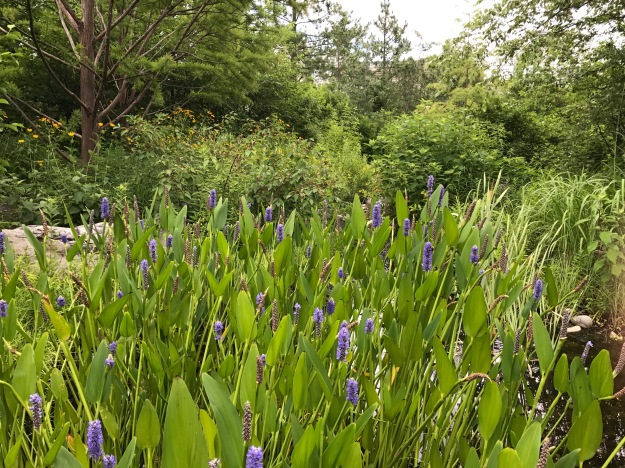 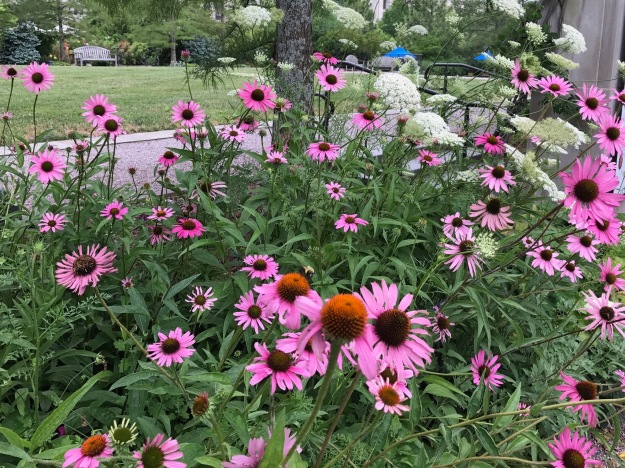 By this time the clouds had burst into a brief shower. The evening brought cooler, drier weather that lasted for the rest of the Fling.