Within a garden I am uplifted. I find joy and peace. But at this time of year as the season wanes, the beach pulls and pulls and I long to see the expanse of sand, feel the rhythm of the water and experience the richness of blue.

On the coast of North Carolina we are fortunate to have many beautiful beaches. At Emerald Isle, where I stayed last week, the views were without flaw. I soaked them in each day and finally about 8:30 a.m. on the last day, with the car packed up for the 180-mile return trip home, I took my camera down to the shore to say goodbye.

A boardwalk from the condominiums where we stayed led from pavement toward the sand, lifting vacationers over the fragile dunes that protect the coast. 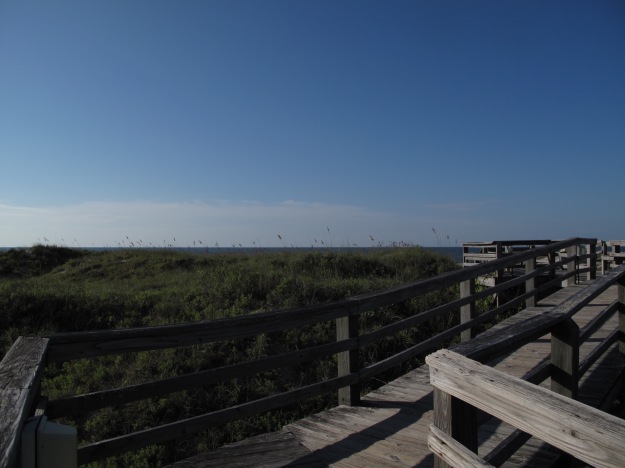 On the boardwalk, heading to Atlantic Ocean

Walking above the surprisingly green tangle of wind-blown shrubs and scrubby foliage, I noticed many birds had found shelter there. They darted around seemingly carefree and talked among themselves.

During my stay I also observed many dragonflies and captured one in this photograph as I made my way to the shore on that final day.

Each time I saw a dragonfly last week I was reminded of a remarkable experience my family shared one August while vacationing at Sanibel, Florida.  We unexpectedly witnessed a dragonfly migration taking place at the water’s edge. Imagine our surprise upon seeing thousands of dragonflies dodging us to form a traffic lane along the shoreline, their destination unknown to us.

Dragonfly at eye level along boardwalk

Back at Emerald Isle though, the boardwalk ended, opening up a path through deep sand. 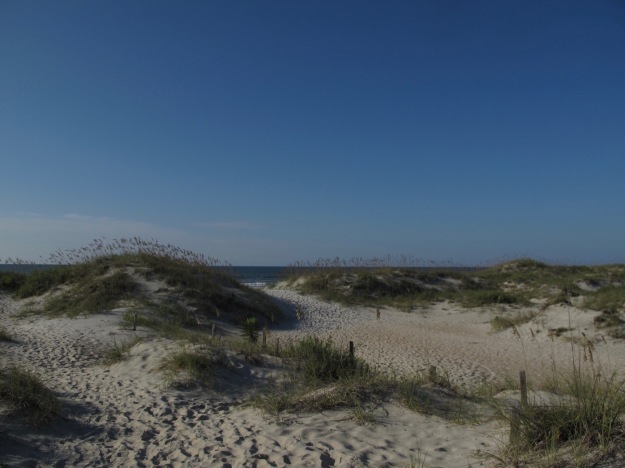 Where the boardwalk ends 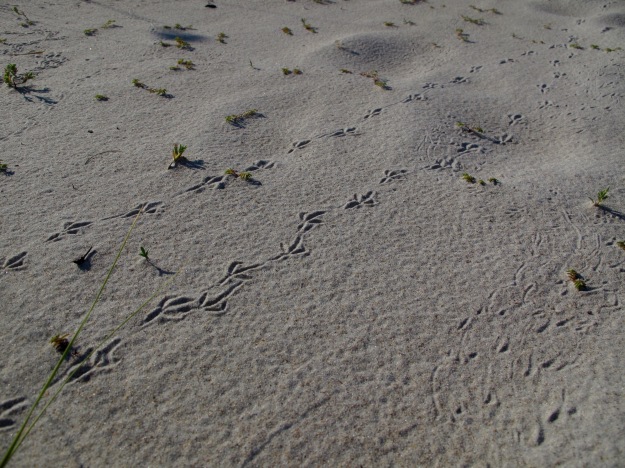 Bird tracks along the sand

Sea oats swayed and glistened in the early sun as I passed by.

And finally the water.

Once on the beach I took a moment to look back toward land. This is the condominium complex where we spent the week.

Looking back toward the condominiums

Fifty-one loggerhead sea turtle nests have been marked this season on this section of Emerald Isle. Just in front of where we were staying sat number 49.

Sea turtles are protected and hundreds of volunteers patrol the beach, watching for new nests, searching for signs of activity within the marked nests and picking up trash that can harm turtles if ingested.

As I made my way to the ocean on my last morning I passed a woman on the boardwalk who was coming in off the beach. She said there must have been a hatching overnight, because a long trench had been dug at two of the nests.

Once on the sand I immediately saw one of the trenches she had mentioned, nest 25, and I decided to take some photos. 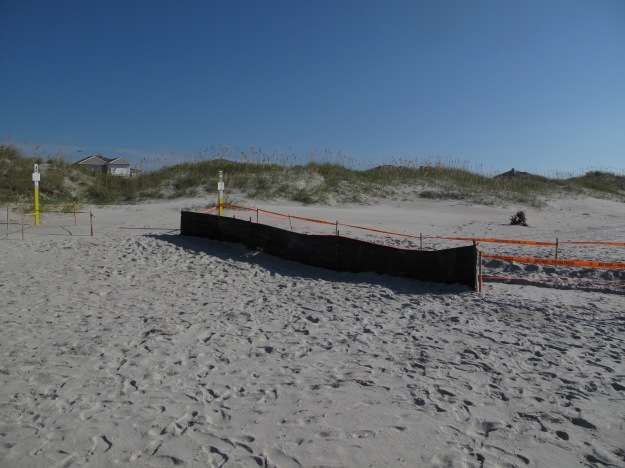 A sea turtle patrol volunteer came up to me curious if I had spotted activity. It turned out there had not been a hatching the night before after all.

But, someone had noticed a signal that one might soon occur. The patrol member explained that two or three days before sea turtles hatch a tiny indentation becomes visible. If you look closely you may see just a minor depression in the middle of the triangle.

Trench ready for hatching at Nest 25

I would love to have stayed a few more nights to see the nest boil for about thirty minutes as 100-120 young creatures emerge from their eggs and make their way down to the sea. Sadly their odds of survival are not good.

The volunteer said there are usually some stragglers for a couple more nights after a hatching. Then on the third evening, volunteers carefully dig out the nest and count any eggs that did not survive. The area then is filled and protective fencing is removed, leaving no trace of the sea turtle activity. 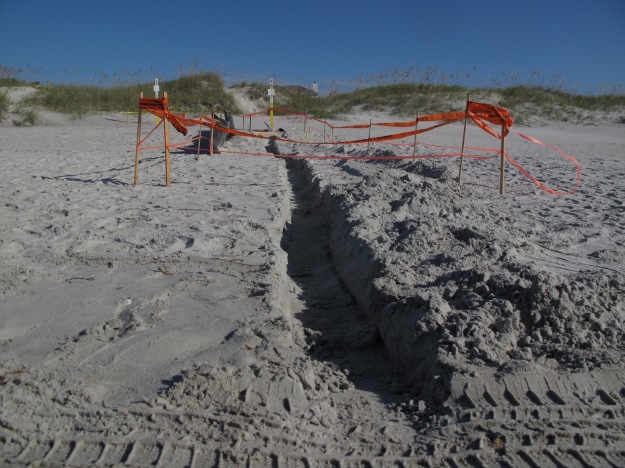 I did not get photographs of everything, but I will keep some images from this trip  in my head. This area is a good spot for collecting shells. My initial day on the beach I picked up nearly perfect specimens of a sand dollar and a whelk, firsts for me.

Another day I walked not far from where we were staying down to the Point, the confluence of the ocean with the sound. Dozens of varieties of seabirds were nesting in a protected area that was unobtrusively fenced off from public access. Outside the designated space many more birds had settled closer to water’s edge. When I was there only a handful of people were out and everyone was respectful of the nests.

Two of my three sisters visited us during part of the week, bringing along a 1000-piece jigsaw puzzle which we embraced. Late one night, by the time it was nearly completed, my husband had already gone to bed, but my sisters wanted to save the last piece for him. We left it sitting on the box.

With my sisters we also explored the city of Beaufort and there saw a portion of Blackbeard’s treasure at the North Carolina Maritime Museum.

I realize not everyone shares my enthusiasm for the ocean, but a week at the coast works some magic that cannot happen any other place. I feel I have found myself again.  Renewed, regenerated, recharged.

Oh, and I saw a dolphin!

39 thoughts on “The Pull Of The Ocean”