Note: Tuesday is actually July 26. Mixed up the date in the post title because I took the photographs on Monday.

Cathy at Words and Herbs hosts the Tuesday View, encouraging garden bloggers to post a photo of the same view of the garden week by week and note the changes.

This Tuesday view was taken at Monday 12:52 p.m. instead of at the usual early morning Tuesday time. Yesterday the sun had gone behind the clouds for a few minutes so I took advantage of the photo opportunity.

In a noticeable change from last week the grass is turning brown in spots. Fescue retreats in this type of weather, but should recover once cooler weather returns in the fall. Monday reached 97° F. There has been no rain for 10 days, leaving some things looking a bit desperate.  I have watered 3 times, but it has little effect.

Another detectable difference is in the circle where the path is lazily being restored. Yesterday I uncovered more of the labyrinth pavers, only a few left to go. A friend and I had done a meditation walk Saturday, and I realized that with the path obscured as it was by thyme, it would be easy to turn an ankle or trip. We managed to not hurt ourselves. The thyme released its calming fragrance as we stepped across it. 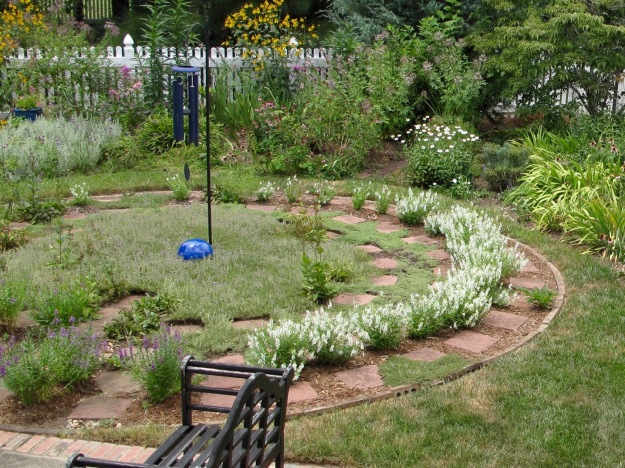 At lower left in the first photo, the edge of a small round border is just barely visible. Here zinnias, planted from seed (maybe mid-June), are finally beginning to bloom.

Looking back north toward the meditation circle, I took a last picture as one of dozens of skippers flying around landed on a Verbena flower. There also were lots of dragonflies and swallowtails but they were camera shy. 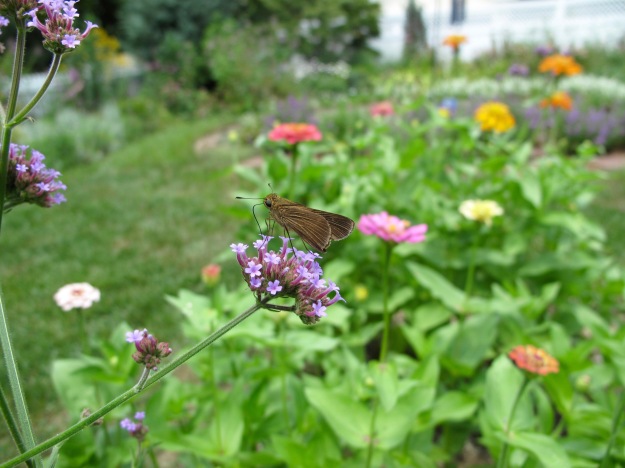 Thanks to Cathy at Words and Herbs for hosting the Tuesday View. Check out her featured view and those of other gardeners.