Summer arrived officially on Monday, and right on schedule the season was underscored by higher humidity and temperatures this week. The late June garden is full of flowers. Cicadas vibrate their song, hummingbirds sip at the offerings of Monarda and Salvia greggii ‘Furman’s Red,’ fireflies pulse their glowing presence in early evening. Sitting on the front porch we often observe Carolina anoles (Anolis carolinensis) scuttling about. They exhibit a range of color from brown to green and occasionally we see males with extended red throat fans searching for mates.

Day lilies have added bright color and interest to the eastern border, much happier than in recent years.

Last year Hydrangea quercifolia ‘Ruby Slippers,’ a dwarf Oakleaf Hydrangea, quickly faded to brown under the severe heat and drought. Now with sufficient rain, after three years it at last has fulfilled its promise of colorful summer flowers. These started out crisply white and have taken on a blushing red aspect.

Phlox paniculate and Cleome hassleriana (Spider Flower) have made a welcome return to the western border.

This phlox, possibly Robert Poore’s, is especially attractive this year. In last year’s drought it scarcely bloomed at all.

Cleome hassleriana (Spider Flower) once again has self-seeded. It has a fascinating flower structure.

Hybrid echinaceas are nice and pollinators love them, but the unnamed ones make a larger impact in my garden. Echinacea is reputed to be drought tolerant but adequate rain brings superior performance. It has spread itself in satisfying ways and runs throughout the northern border. 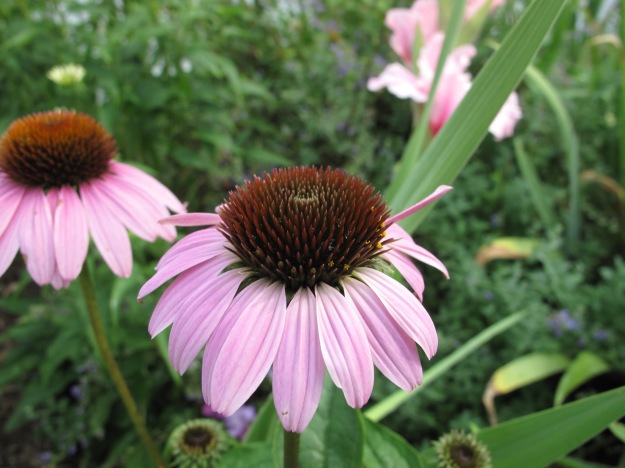 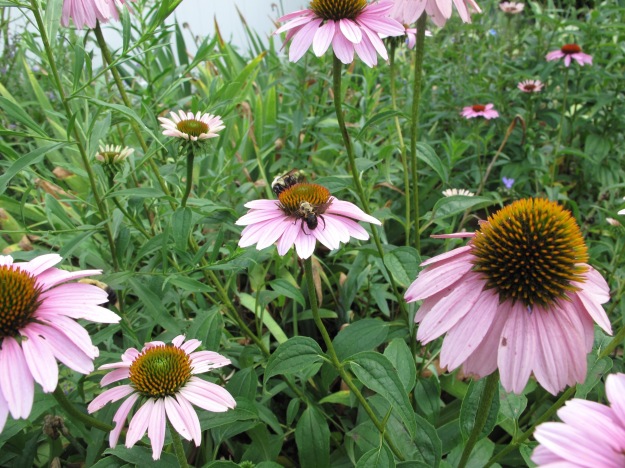 More echinacea is planted against the back of the house which has western exposure and so receives the hot afternoon sun.  This view is from slightly behind the border at the corner near the north end gate, looking toward the meditation circle. In this area echinacea plays a supporting role Monarda didyma (Scarlet Beebalm).

Beebalm actually makes up the larger portion of this area. Bees love monarda, as do hummingbirds. 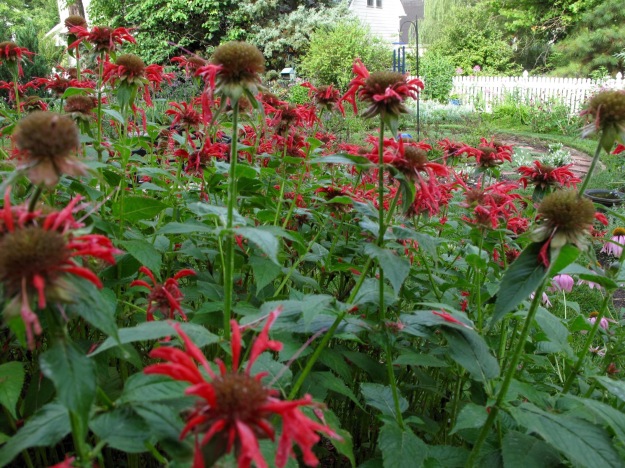 Shasta daisies line a border against the house between the back garage steps and steps leading to the screened porch. (That’s the red monarda peeking through the railing from the opposite side of the house.) 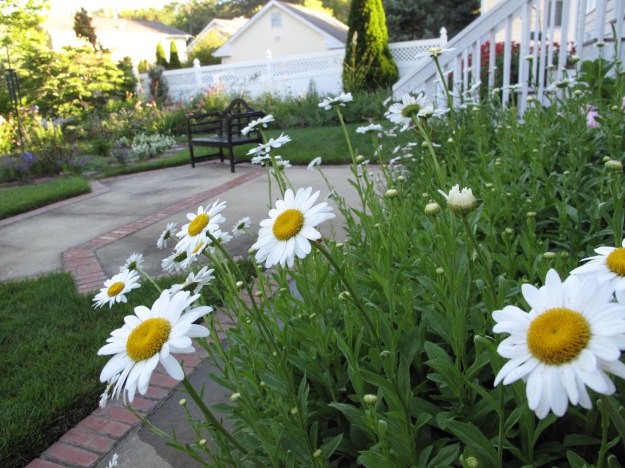 Looking very fresh this daisy grows at the far end of the same border, in front of the hydrangeas.

Dahlias both bright red and rich deep mahogany or wine red have returned from last year and I look forward to using them in indoor arrangements.

Breakfasting this morning on the screened porch overlooking the garden we watched as a baker’s dozen American goldfinch (Spinus tristis) sat feasting on Verbena bonariensis in a small island at the southwest corner. I have tried many times to photograph bird visitors but my camera produces dismal results at this distance.  Still you may be able to spot the males clothed in brilliant yellow and the equally lovely females wearing more subdued greenish garb.

For the first time in a long while I missed sharing Garden Bloggers’ Foliage Day on the 22nd with Christina and others, so thought I would include in a few images to illustrate how the foliage is holding up. This time last year even rigorous daily watering, which generally I am loathe to do, could not keep things green. This year feels totally different though. Because of plenty of spring rains and some recent heavy thunderstorms, the June garden feels lush and green.

For some unexplained reason the Cornus florida (Flowering Dogwood) barely tried to flower this year. Perhaps the poor weather last year kept it from properly forming buds last fall for spring display. Its foliage however looks nice. Often by now the leaves are drying and turning brown but this year it remains happy. To its left Callicarpa americana (American beauty berry) has grown immensely in the past couple of years and is forming flowers.

Also ‘Carolina Sapphire’ Arizona Cypress adds evergreen structure to this corner that forms the northwest boundary of the garden.

I have kept the flowers of Euphorbia ‘Shorty’ for the time being but went ahead and removed those of Euphorbia ‘Ascot Rainbow’ several weeks ago.

This passalong dusty miller makes a nice complement to the ‘Ascot Rainbow’ forming a nice ground cover as it threads itself along the western border. Columbine which was cut back after blooming has freshly regenerated leaves.

Somewhat resembling the passalong Dusty Miller seen above, the Artemisia ‘Powis Castle’ (Wormwood) seen below behaves much differently, forming a well-behaved mound of silvery foliage. Something I often show for GBFD, it is at its best this year.

Thanks to Christina for hosting GBFD each month.

I will leave you with two more images I am out of time to describe. I am off to get ready to celebrate 39 years of marriage with my sweet husband this evening. Hope everyone has a wonderful weekend.