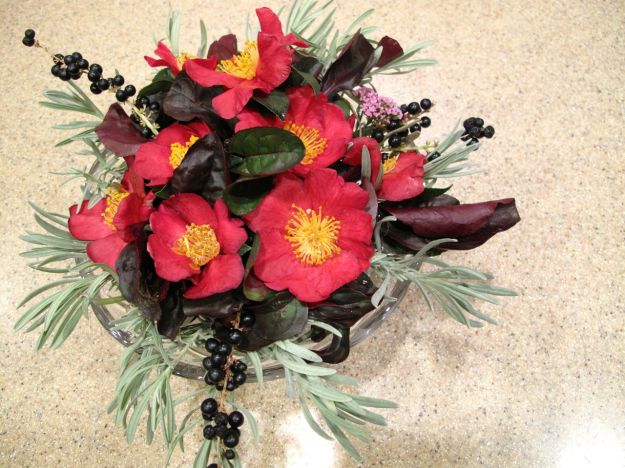 In A Vase On Monday-Yuletide

Monday brings an opportunity to practice flower arranging by joining in Cathy’s weekly challenge In A Vase On Monday to create a floral arrangement from materials gathered in one’s own garden.

The Camellia sasanqua ‘Yuletide’ is blooming as it should be at this holiday season and though it has appeared in many recent Monday vase, it takes center stage again this week.

But the original inspiration for this arrangement was a group of 6 small Penstemon digitalis ‘Husker Red’ plants I pulled from the meditation circle today where they had sprouted up. I thought the red and green hues of the leaves would make a nice arrangement in and of themselves. I used the plants, roots and all, placing them over top of florist’s foam, secured with pins. Later I will try to reestablish them in one of the borders if they hold up.

Eventually I could not resist adding the camellia flowers for a bit more color, but using them led the design away from the restraint I had envisioned.

I thought I would create a low, arrangement, but raise it by using a crystal pedestal dish.  The design works best from overhead though as I did not work out the proportions carefully except from the top view. 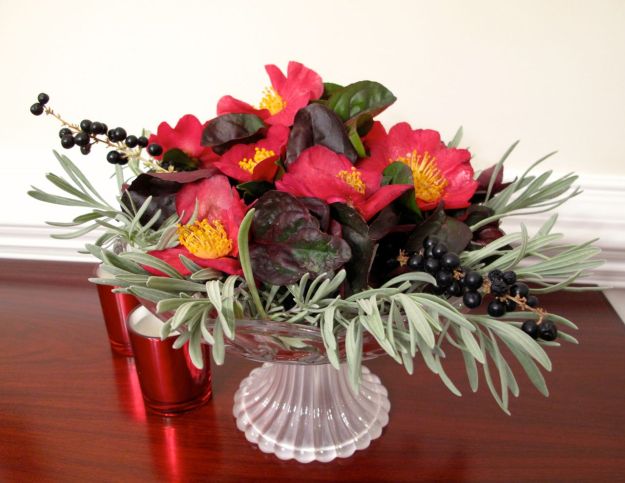 A few sprigs of black berries of Liriope spicata (creeping lilyturf) added a textural element to contrast with the rest of the design. The dark color of the berries are intended to pick up the deep coloring in the penstemon as well. One small sprig of Achillea filipendulina (Fern-leaf Yarrow) was blooming yesterday and it made a useful accent.

The arrangement will add some color and cheer this week as Christmas nears. Saturday we had a snow that lasted about 30 minutes before turning to rain. The snow did not stick at all but it was fun to watch. And yesterday was winter solstice—the days are getting longer.

Thanks to Cathy at Rambling In The Garden for hosting. Please visit her to see what she and others are placing In A Vase On Monday.

24 thoughts on “In A Vase On Monday—Yuletide”