The meditation circle was used for walking meditations this spring and summer, but I never got around to planting anything new until fall. During the first week of October I added red Antirrhinum majus (Snapdragon) and blue Viola (Johnny-Jump Up). Both are blooming right through the unusually cold, record-setting weather we have had for the past week.

A few violas also volunteered from last year but not in their designated spot.  The planting areas are supposed to form the “wall” between the pavers that form the path.  Instead the violas and actually, quite a few Penstemon Digitalis (Beardtongue) ‘Huskers Red,’ have spread themselves around in-between the pavers. I left most of them for now even though they have not followed the rules.

Early next spring I want to add back some Iberis Sempervirens (Candytuft).  This image from  a couple of years ago shows one of my favorite plantings in the circle (of course, it was May). Not much is left of it today except the very reliable Husker Red. 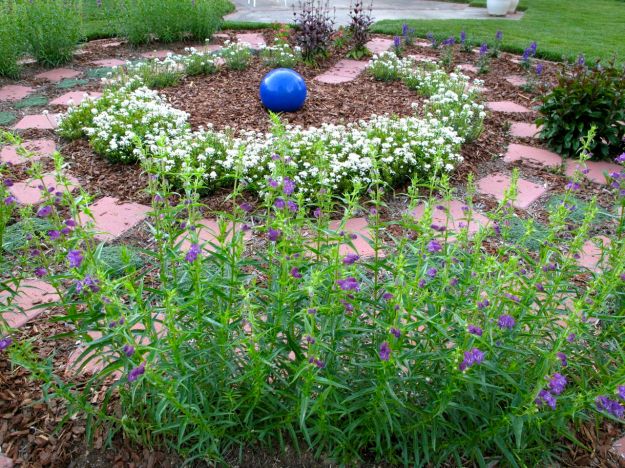 When the labyrinth was first conceived I had imagined planting it one time with perfectly chosen plants and reaping the pleasure for years to come, but instead I guess I will reap the pleasure of devising and experimenting with new planting schemes. I had not taken into account at the time such outside forces as drought, standing water or voles.

Several garden visitors have remarked at how the meditation circle has grown in and become more integrated into the rest of the garden. It is true, but in some ways I prefer the more spare and stark look it had when it was first built.

This year the various thymes thickened and crept toward the pavers. I thought I would like that effect but now I am tempted to trim them back to be more tidy. It looks drab now but Thymus serpyllum ‘Pink Chintz’ (Pink chintz thyme) in the center of the circle bloomed from the first of July until the end of October. All the thymes should remain evergreen through the winter.

Detail of thymes creeping over the path.

Today’s monthly garden club meeting featured Jihye Schumann, a designer who began studying floral design 14 years ago in Korea. She demonstrated making arrangements for the home with fruits, vegetables and flowers. Unfortunately I did not have a chance to get pictures of her more elaborate creations, but I did win one of the small ones in a raffle.

Jihye showed how to create a simple and inexpensive display to decorate a tea table by filling three inexpensive glass cups with chrysanthemums from a grocery store and found magnolia leaves.  My photograph does not do this justice. Since I could bring home only one of the cups I cannot show the full effect, but the display of three looked quite nice. She suggested adding candles and a teapot to the three cups of flowers and everyone nodded, envisioning how lovely that grouping might look.

The interesting part was how Jihye manipulated the fresh magnolia leaves. First she stacked and aligned about a dozen leaves so they were all pointing the same direction, then she cut them in half with scissors.

Next she restacked the leaves tightly, such that the cut sides all faced down. She inserted the stack into the container with the cut side down. She repeated the process two more times so there were three groups of leaves and then she just added a few stems of flowers for color. Simple, but unusual. 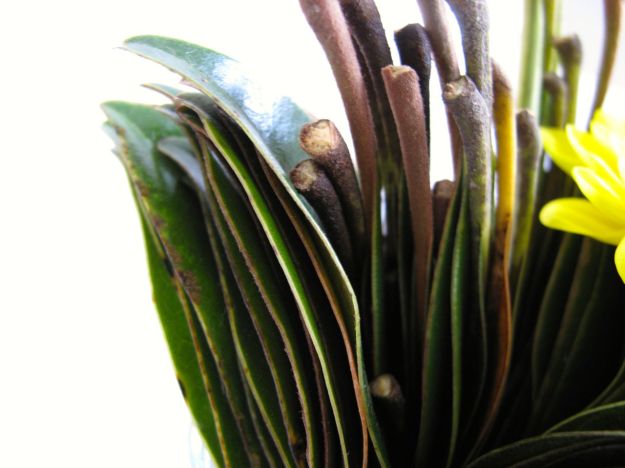 Magnolia leaves, stacked and cut in half provide the foliage.

27 thoughts on “Meditation Circle At MidNovember”