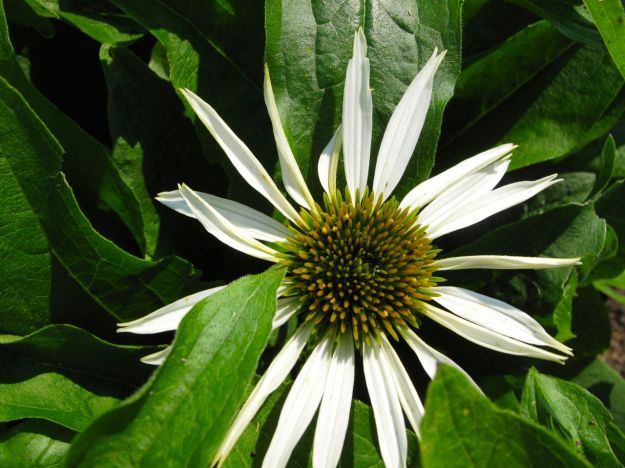 Echinacea have been a mainstay this summer, drawing bees, hummingbirds and American Goldfinches to the borders. The blooms on this white one, Echinacea purpurea ‘White Swan’, really improved after the recent rains. 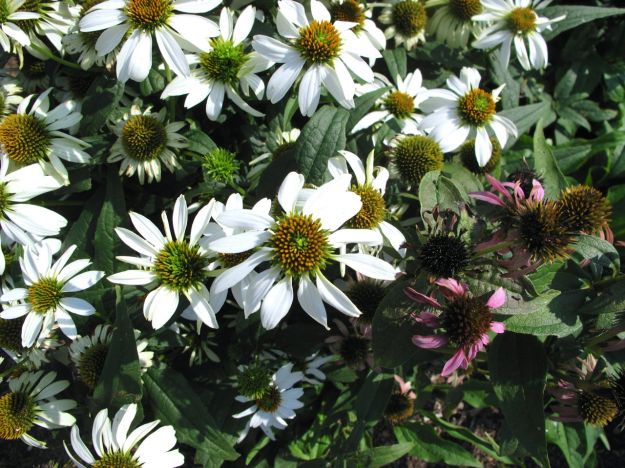 By design I have a lot fewer Leucanthemum x superbum (Shasta Daisy) and Tradescantia (Spiderwort) in the garden this year, both of which were becoming rather aggressive spreaders. 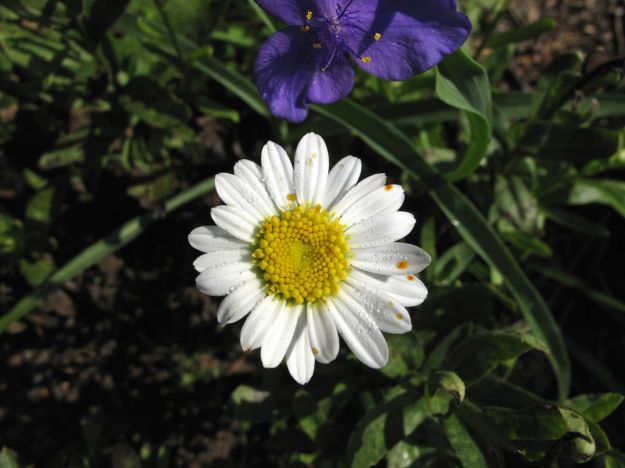 The sap of Tradescantia lately is causing me to have an itchy skin contact rash. For that reason and because I want to control its spread, I tried not to allow it to bloom at all this year, but a few sneaky flowers remind me why I have enjoyed it for so many years. 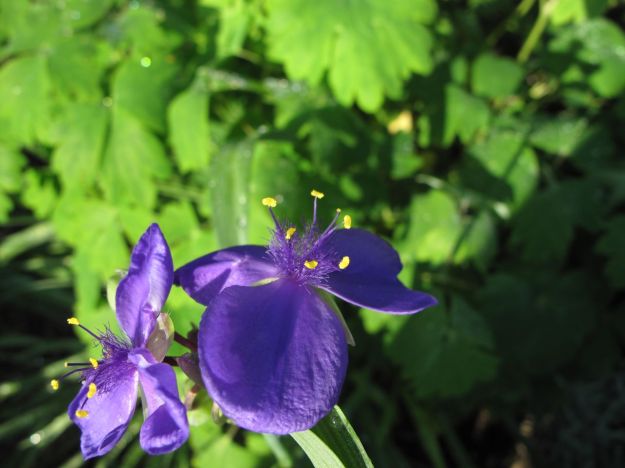 I have simply grown tired of Shasta daisy after letting it roam for a lot of years.  One entire bed was taken over by this plant, so I still have a lot of work to do to tame it. 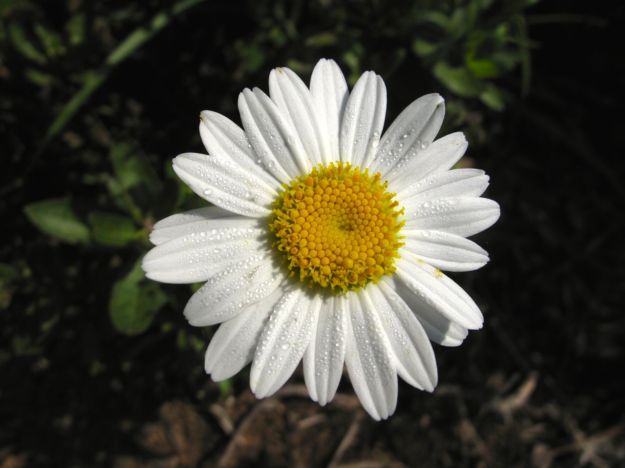 Salvia uliginosa ‘Blue Sky’ (Bog sage) and Sedum ‘Autumn Joy’ (Herbstfreude) are pairing up in a lovely color combination. This salvia also spreads freely but I have finally learned to be ruthless in pulling it out when it wanders too far. 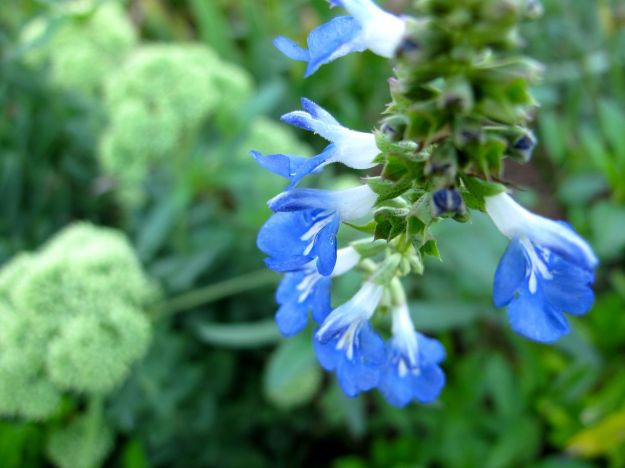 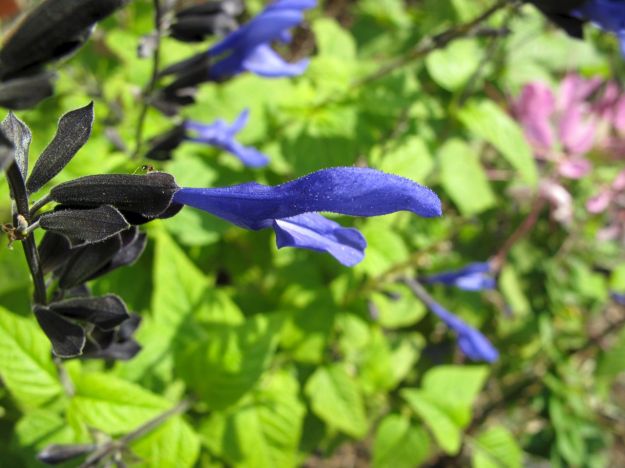 This passalong everlasting Sweet Pea looked miserable most of the summer but, like the Black and Blue salvia, it was rejuvenated by the rainfall.  I planted annual sweet peas seeds this year but none survived. 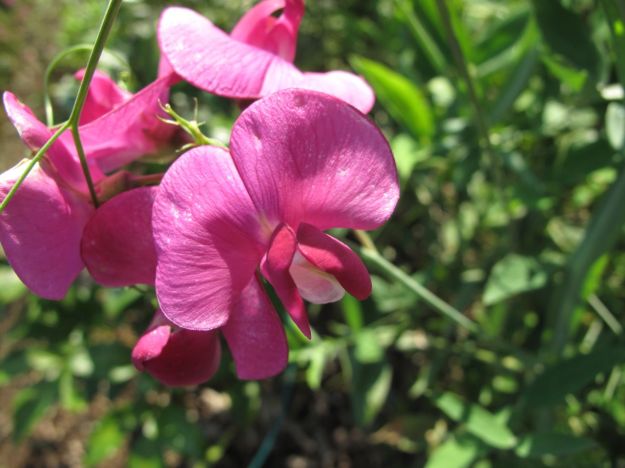 The bird feeder is always a source of entertainment and occasionally the birds plant a few flowers for themselves. I am not sure exactly what this volunteer is but it is cheerful enough. 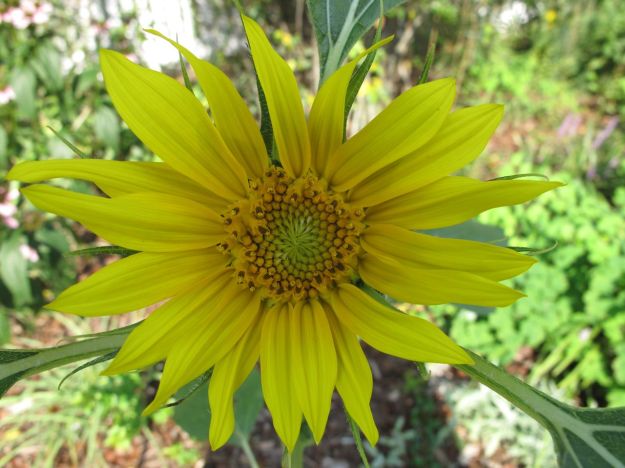 For the first time in many years my Stargazer Dahlia, did not return, done in by the cold winter I suppose. It was a passalong from a friend and former neighbor and so I missed not seeing it this year.  In spring though I had picked up a dinner plate Dahlia bulb, packed in a fairly generic-looking box, but labelled to have come from The Netherlands. 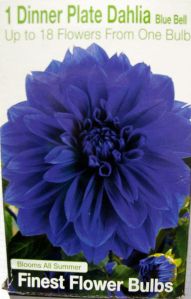 Well the dahlia has finally bloomed. Granted I selected a poor spot for it, but I do not think it will  reach the promised “up to eighteen blooms per plant.” Neither does the size nor color correspond to the package at all. The flower is beautiful though and I am happy to have another dahlia for the garden. 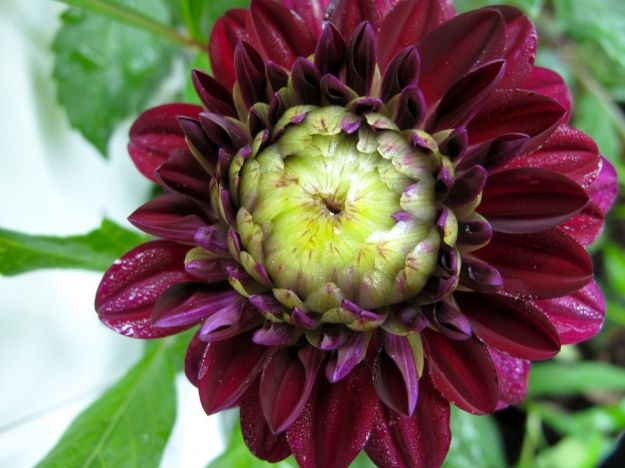