I love summer but not my perennial garden in summer.

A garden club friend told me several weeks ago she and another were wondering when they could drop by to see my garden. I must have gasped audibly. Laughing but serious, I answered  “next May!”

My garden peaks in spring when the irises bloom. In anticipation I enjoy booting winter on its way and seeing the awakening of plants as the weather warms. Spring is the time when, with the foliage fresh and each first blossom so pure, my hopes and optimism as a gardener are soaring.

Though I love summer for the long daylight and easy pace, this particularly dry, hot  and humid summer has challenged my interest, if not my very identity, as a gardener.  Soon after the irises started blooming, the rains stopped coming. Temperatures spiked into what I once thought was the range only of the hottest days of August.

I planted a few zinnias and other seeds, but postponed my planned trips to the garden center to select colorful annuals for planters and for filling in some bare patches in the garden. I pulled out the pansies that had added so much color to the meditation circle all winter and spring, thinking soon I would install some other cheery flowers. I watered a few times but soon it became clear that with the extreme heat a few times would not be adequate to tide the garden over until the next rain. For weeks dense, dark blue-black clouds that formed overhead kept bringing empty promises, either dissipating completely or just drifting away. As the garden dried up I abandoned it for other activities.

Although there are no interesting scenic views to share,  I want to note a few individual plants that have tolerated the drought and heat this summer.

Lantana died back hard during the cold winter. It took a while for it to start blooming this summer but has been happy producing its multicolored florets for several weeks. 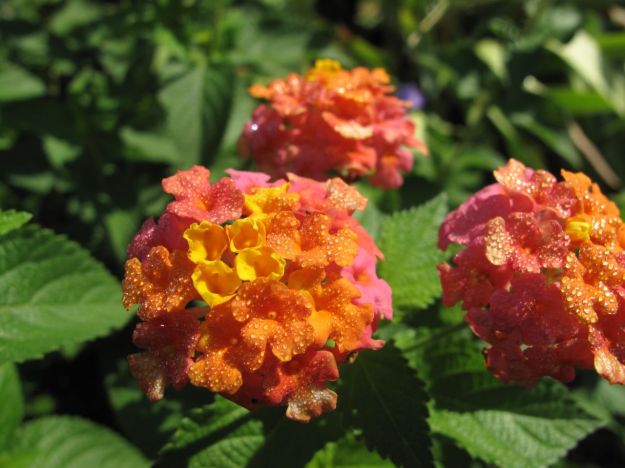 This little skipper posed briefly for me, but, just seconds before, it had settled upon my hand and sat patiently while I marveled. This was the first time ever I have held a butterfly.

Skipper on fence post just after leaving my hand

Last summer I planted the very center of the labyrinth with thyme. 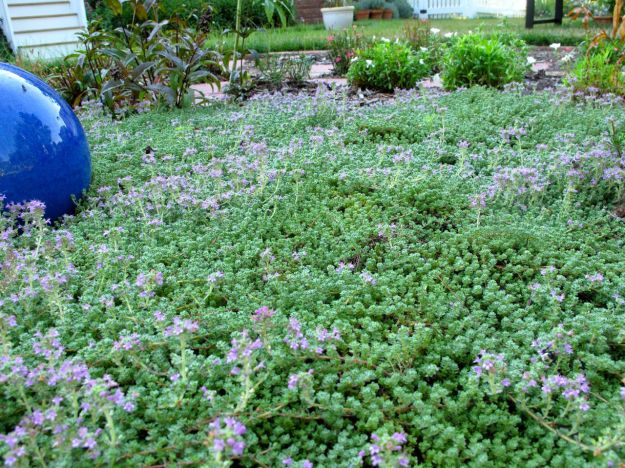 I learned too late this is not the kind usually used in cooking, but is is slightly fragrant. It is Thymus serpyllum ‘Pink Chintz’ (Pink chintz thyme).

I am pleased the thyme has spread so well and the bees are attracted to the pink-violet flowers. 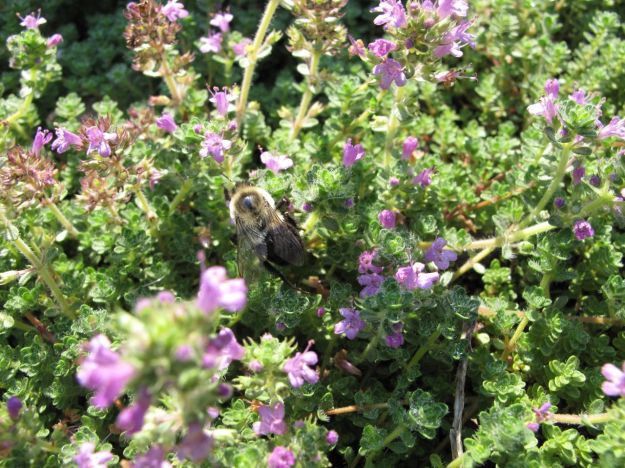 Waving above the thyme are a few cleomes sporting seed pods. On one a grasshopper (or maybe a katydid?) found resting spot. 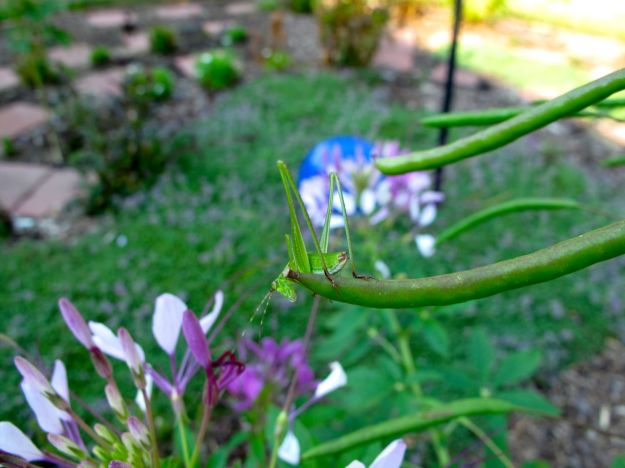 The zinnias I planted from seed earlier in spring get by without much water. I like that the seed packet contained a good mix, including yellows and oranges, and not just mostly pink.

Rudbeckia hirta ‘Irish Eyes’ began blooming several weeks ago. Here a Hairstreak butterfly (not sure which one) and a bee travel around the cone. 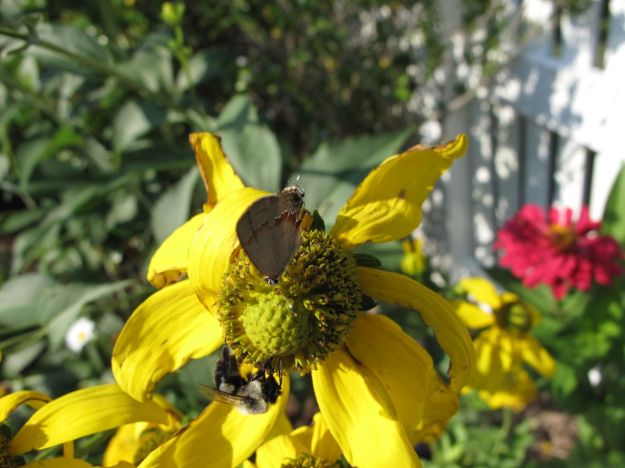 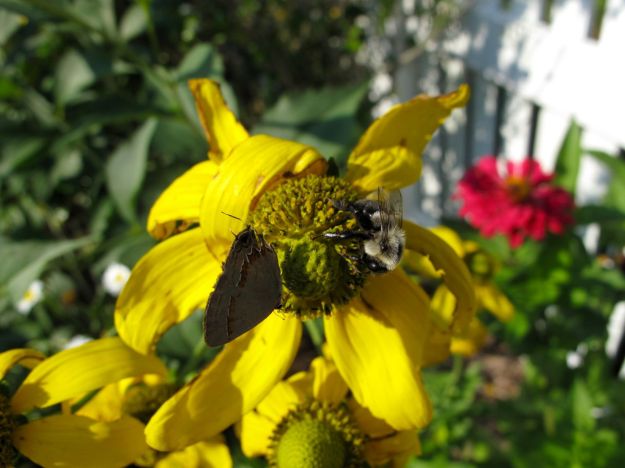 Finally the bee moves on and the hairstreak emerges into the sunlight. 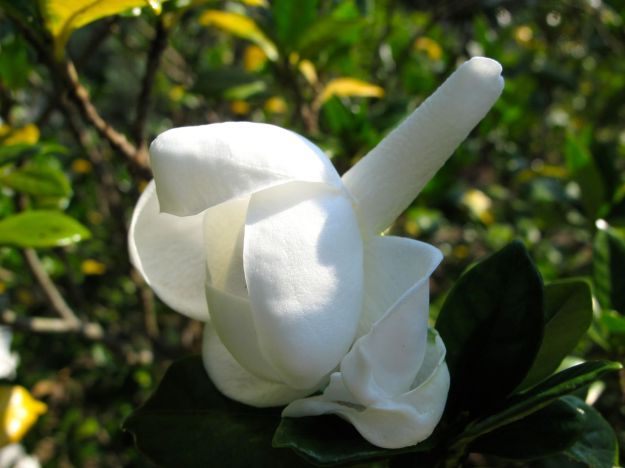 Last year I planted a row of Alyssum ‘Easter Bonnet Violet’ along the path of the labyrinth. It did poorly but a couple overwintered and now are flowering.

Last Tuesday around 5:00 pm we finally had a big thunderous storm. While I just thought my garden seemed nicely refreshed afterwards, I did not realize how much rain had fallen. In fact several neighbors told me later we had five inches. Some of the storms drains a few streets away were overwhelmed. One neighbor shared his video of water a foot deep streaming down the road and into his yard, a small amount of which entered the crawl space of his house.

My garden had some sprawling plants, tangled and twisted after being knocked down by the wind, but largely the garden benefited from the storm. The temperatures moderated appreciably for the rest of the week.

This morning brought another shower, a soft gentle rain this time, and I find myself liking the garden again, imagining it can be redeemed. Who knows? It might be ready by “next May!”

After The Rain. Garden View With Meditation Circle

24 thoughts on “Looking Ahead”