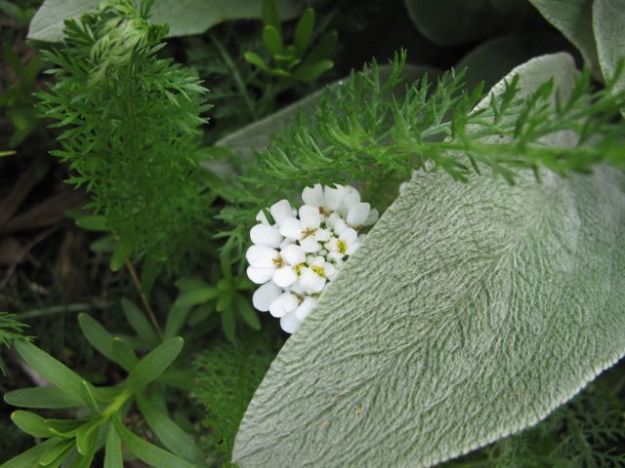 A bit of happenstance in the late evening garden forms a nice texture study. A Candytuft with its bright white flower and slender leaves is tucked between the feathery, dark green of a dwarf Yarrow and the fur-like, silver-gray of a Lamb’s Ear.

The Tradescantia (Spiderwort) in this garden are violet, purple, and even pale blue, but not usually nearly white with a center that hints of pale lavender.  Unlike the others which are pass-along plants, this was an actual purchased specimen. (Of course, it has moved itself around and is no longer where it was planted originally.)

The Cornus florida (Flowering Dogwood) opened a week ago. The large white petals are actually bracts. The greenish-yellow cluster in the center is made up of about twenty small flowers.

The meditation circle has been in bloom since December thanks to Iberis Sempervirens ‘Purity’ (Candytuft). Since a series of recent heavy rains the Candytuft has looked really tired and will soon need to be trimmed back. After almost a full year I am still undecided on how to finish planting the labyrinth with evergreens. An annual, Angelonia, bloomed here well into October so it may be a good choice again this summer.

The garden in early April is fresh and growing enthusiastically. In the northern border Meadow Sage ‘May Night’ adds a bit of color, but soon the irises will be ready for a vibrant display. 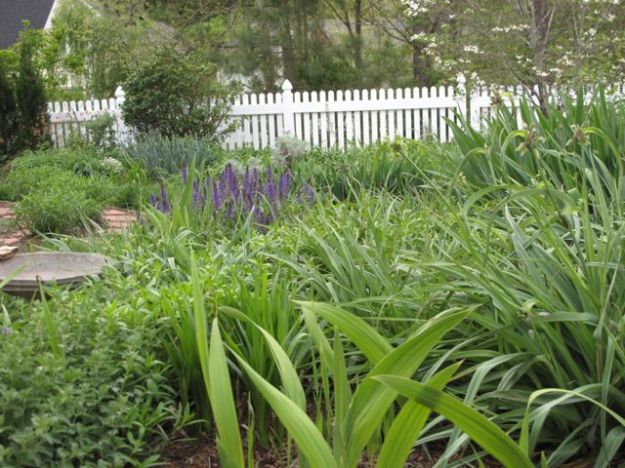 8 thoughts on “Late Evening In An Early April Garden”