After facing several years of severe drought in this area, the plants for the meditation circle were selected last spring with drought tolerance in mind. In the past twelve months there have been some pretty decent rains though. As a result much of the thyme is blackened and dying this winter (or at least, dying back) and a few small patches of moss are volunteering near the entrance where water accumulates. The moss is pretty exciting actually. The thyme is Thyme Thymus x citriodorus (Silver Edge Thyme).  It did bloom a little last summer but overall has not contributed much in this location.

Penstemon  mexicali ‘Pike’s Peak Purple’ (Beardtongue) separates the path on the right-hand side of the labyrinth. This plant was mistakenly purchased thinking it would be more similar than it is to the beautiful clumping penstemon, Penstemon digitalis ‘Husker Red’.  Instead ‘Pike’s Peak Purple’ has a much looser form. To its credit it certainly has been green all winter.  I just came across some advice to cut ‘Pike’s Peak Purple’ back to the crown in winter to promote more shapely, better-behaved growth.

The Penstemon digitalis ‘Husker Red’ has beautiful burgundy foliage which, after the few cold spells this winter, became only a little bit limp. These two ‘Husker Reds’, which serve to demarcate a turnaround point in the labyrinth, have performed reasonably well and when viewed close up, help to provide nice winter interest. From a distance one might not take notice, as the color blends closely with the mulch.

Iberis sempervirens ‘Purity’ (Candytuft) in the center of the circle has exceeded expectations.  Not only has it remained evergreen, it has even bloomed much of this rather mild winter.

The left side of the labyrinth was planted with Angelonia and marigolds this summer and has been simply left bare while the perennials are being evaluated this winter. Annuals are a less expensive option in the short run than perennials and will be used to provide spring and summer color until evergreen plantings can encompass the entire circle. 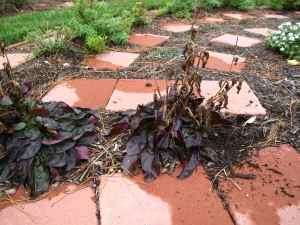