This current garden, so in need of rejuvenation, has been in place since 2001 when our house was built. As the house was being readied, in the back yard of the mere quarter-acre property, beds were laid out on three sides at the perimeters. Significant soil improvements enabled me to easily and successfully transport a great number of plants from my previous garden. Thus the new garden was quickly established, even though it was during a serious summer drought, and with few actual purchases at first.  It does not look like much now, but has at times been quite colorful and interesting. 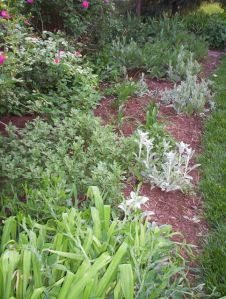 Structure will be a key focus of the garden’s redevelopment. I’ve never been pleased with the structure of this current border garden, sitting so exposed as it is in the suburban closeness of vehicles, concrete drives, and air conditioners. But the plants themselves are dear.  This is my memory or heirloom garden, full of plants that brought with them the history of my original garden in rural Orange County.

Sadly few pictures exist from that original garden, none close at hand anyway; nor does the garden still exist.  This fact may make it easy to idealize that space a bit now, but deservedly so. It was occasionally spectacular! It was my first experiment with a perennial garden, marked with winding, sloping paths that led to different sections of the half-acre yard.  Sitting among mature pines, bordered with rocks, some spaces were getting sun for the first time in years after storms had felled numerous trees.  These played host to phlox, daylilies, and irises.  Still there were plenty of shady niches for woodland plants such as Jacob’s Ladder or bluebells, and the azaleas thrived and birds found homes.

A special relative from my home town, an elderly, wise and funny woman, became my gardening mentor.  A visit to her house nearly always ended outside among her rambling, treasured plantings of sasanqua, rose campion, spiderwort, old-fashioned rose, spirea, pussy willow and crabapple trees; and on the trip home the car was full of cuttings she had generously shared.   Another dear friend contributed plants, some of which were divisions of natives she had rescued during construction of Jordan Lake.  My daughter participated as well, sketching garden plans and recording planting sequences.  That first garden just coalesced into a gratifying unity of nature and dear people and there I felt a special sense of place.